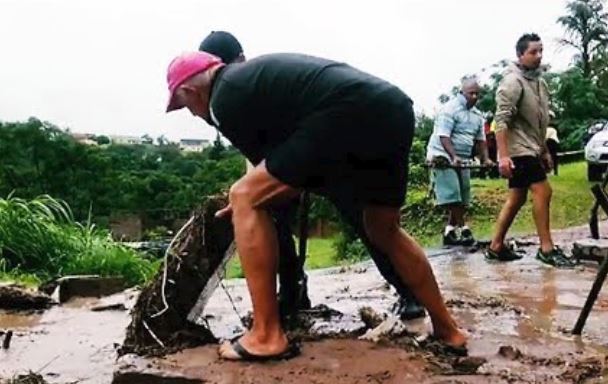 Queensburgh, south of Durban, was hard hit by floods on April 22 2019 and left seven people dead after structures collapsed in the area.
Image: Orrin Singh

"There were about 150 people protesting at Varsity Drive and allegedly stoning vehicles. Police have been deployed in the area to monitor the situation," he said.

It is believed that frustrated residents were demanding that their shacks be rebuilt following the deadly flood, which claimed 67 lives in KwaZulu-Natal.

Final figures are expected to be released during the day.
News
2 years ago

On Friday morning, a group of 300 people blockaded Shannon Drive and Mountbatten Drive in Reservoir Hills with stones and burning tyres.

"They were demanding re-building of their shacks after the floods damaged them," said Zwane.

According to a report, tabled in the eThekwini municipality's executive committee meeting on Friday, the city would require about R330m to address the damage to housing caused by the torrential rains which led to floods.

The Human Settlements Unit plans to rehabilitate and reconstruct damaged low-cost housing, community residential units, informal settlements and transit facilities through the utilisation of existing funding and to seek additional funding from provincial and national government, the report states.

The city would need R658m to repair the damage to all infrastructure caused by the floods.

Prince Kaybee gives R150k to Durban flood victims: The most difficult thing is the loved ones lost

Prince Kaybee has encouraged others to join him in donating to disaster relief efforts.
Entertainment
2 years ago
Next Article