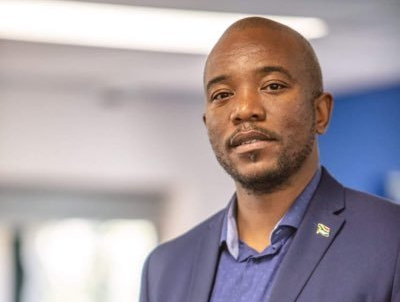 DA leader Mmusi Maimane says young people are realising the ANC is no longer a movement but a monument.
Image: Mmusi Maimane via Twitter

DA leader Mmusi Maimane says the ANC has not lived up to former president Nelson Mandela's dream of a united South Africa.

He was addressing the media in Johannesburg where the DA unveiled its latest billboard in the CBD.

There's nothing "good" about DA leader Mmusi Maimane as he does not offer any better alternative than other parties.
News
3 years ago

Maimane slated the ANC's candidate lists for parliament and the provincial legislatures.

"When you look at the ANC's lists, you've got to ask yourself a question. Are they lists that reflect all the people of this country? Are they lists that are bringing back criminals to parliament? Is this what Nelson Mandela was about?" asked Maimane.

He said the ANC, as a liberation movement, had divided South Africans.

"Let them show us with action how they have preserved the legacy and the vision of Nelson Mandela and I think their words will ring hollow when we assess the fact that they have sought to divide our nation further," he said.

Maimane said the ANC had failed to build an inclusive economy and that had led to 10- million jobless South Africans.

"If we are going to make a South Africa that is for all ... we must have an economy that works for all," he said.

Maimane said the youth of the country were ahead as they had realised they lived in a global community.

He said young people would look back and realise that the ANC was no longer a movement, but a monument.

"It's a place where people must now go, look and say: 'This is the past, the future actually is about a movement of all South Africans working together'," he said.

Several senior members of the Democratic Alliance have considered breaking away to form a new party because of disputes about its policy direction, ...
News
3 years ago
Next Article