Officials, NGOs, celebs and ordinary folk muck in to mop up KZN 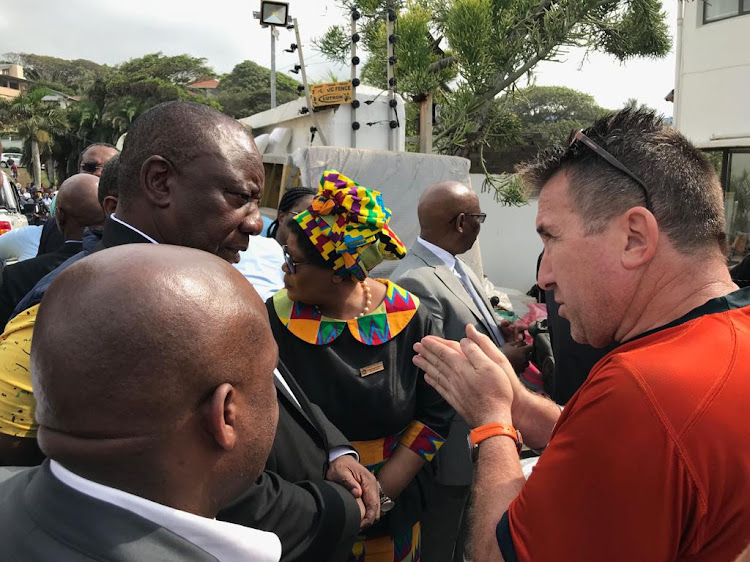 President Cyril Ramaphosa talks to a member of the Da Silva family whose home collapsed in Amanzimtoti following torrential rains in the province on Monday.
Image: THULI DLAMINI

As the death toll from the KZN floods is expected to rise, emergency services are continuing to make their way through the debris and collapsed homes in the hopes of rescuing people.

Here is what has happened so far.

Fifty-one people from KZN have been declared dead as a result of the floods caused by the torrential rain in the province. Emergency services comprising the police, IPSS medical care and metro search and rescue have been working in Malvern, Umlazi and Amanzimtoti, conducting searches and helping affected communities salvage their belongings.

Some houses in the Malvern informal settlement have been washed away, leaving many homeless and displaced. Videos and pictures of destroyed properties from Amanzimtoti, Chatsworth and Umlazi, in the south of Durban, have been making rounds on social media.

Almost died this morning... This is wat my room looks like Umlazi #DurbanRain pic.twitter.com/5DVPWIgbH4

People used the power of Twitter to donate aid to affected communities to rebuild their homes. Celebrities and various organisations, including social media campaign Country Duty, have intervened to help KZN residents hit by the floods.

Donating 150k to the families that lost their homes in Umlazi???, its not enough so if you inspired by this post join me lets rebuild Ulmazi. #PrayForDurban #PrayForUmlazi❤️ pic.twitter.com/JJDXDcVLqI

Hi there, we are working closely with @GiftoftheGivers to support the victims of the #DurbanFloods. Our thoughts go out to those affected and our soup trucks are on site to provide food and blankets. We #ActForChange to help those in need.

We want to commend rescue services at all levels of government for their rapid response. Resources have been mobilized and our teams on the ground have saved lives. More than 1000 people have been displaced and government is providing shelter and support to those in need. pic.twitter.com/Ve1L8CHK5A

President Cyril Ramaphosa made his way to KZN where he has been speaking to the victims of the flash floods in areas including Amanzimtoti and Umlazi. Ramaphosa said the Treasury would release funds to provide relief for those affected.

The vicious storm that pounded greater Durban since Monday night has claimed at least two dozen lives and and left 32 people injured.
News
3 years ago
Next Article