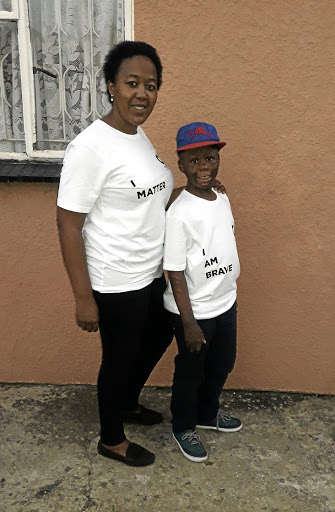 Tebogo Tsotetsi and her son Molemo who underwent laser treatment after surviving a fire ./Supplied

A Soweto mother is prepared to ascend to the highest summit on the African continent in order to make laser treatment available to survivors of fire after she lost her
three-year-old son in a blaze.

Tebogo Tsotetsi is a part of a 12-member expedition organised by the Avela Foundation in an attempt to summit Mount Kilimanjaro in Tanzania. The aim of the expedition is to raise funds to buy a laser machine for the Chris Hani Baragwanath Academic Hospital's burns unit.

Tsotetsi's son, Kutlwano, was killed when their home caught fire in 2014 while his brother Molemo, who was five-years-old at the time, was left with 50% burn wounds.

The fire was apparently caused by a faulty plug.

Tsotetsi was inspired to get involved with the initiative after experiencing difficulty with accessing laser treatment for Molemo as they had to travel to Red Cross War Memorial Children's Hospital in Cape Town, which is costly.

Tsotetsi said meeting Avela founder Cami Palomo and the team had helped her deal with her ordeal.

"I'm so grateful that our paths crossed with Cami's. Since we met Cami our lives have truly changed for the better. Cami and her foundation have helped us realise our potential and has also taught us that Molemo is not a victim but a true survivor," she said.

She said she was now in a position to help other mothers who are in the same position as hers.

Two train sets that were burnt to ashes at Cape Town Station on Sunday were worth an estimated R33m‚ according to Metrorail.
News
3 years ago

Palomo said the laser machine helps to reduce the appearance of scars.

"For many parents across South Africa, travelling to Cape Town is not an option due to the costs involved. We need to avail this equipment elsewhere too in order to ensure that children with serious burn injuries have access to the latest treatment technology. The machine changes lives by helping restore the confidence of children with burn scars," Palomo said.

She said Tsotetsi had shown resilience.

"This is a mother who has suffered an unspeakable loss but who has remained strong for little Molemo who has endured, not only the loss of his little brother, but also intense physical and emotional pain," Palomo said.