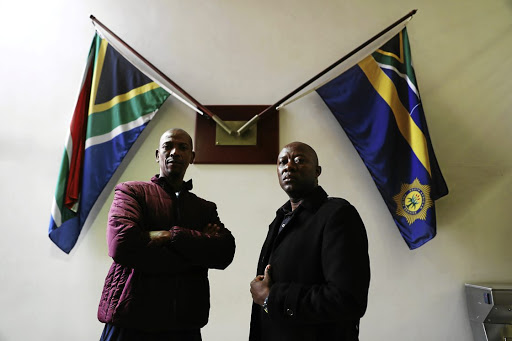 The two police officers who rearrested a dangerous criminal four months after he escaped from the clutches of justice spent sleepless nights fearing for their safety while tracking him down.

"While following up on information about his whereabouts he saw us and hid in a scrapyard. He called me later that night and told me that he saw us looking for him. That's when I started having sleepless nights because it meant he could easily find one of us and kill us if he wished to," Dlamini said.

Thwala, along with Mongezi Mcunukelwa, escaped from the court in December. Mcunukelwa was rearrested 10 days after escaping, while Thwala sent police on a wild goose chase for four months while hopping between various hostels in Gauteng and KwaZulu-Natal.

"We first arrested this boy [Thwala] along with Shawe after they killed a guy in Jeppe. Thwala also killed another person later that month. He escaped from Sun City [Johannesburg prison] after we arrested him," Masondo said.

He said they worked vigorously in their quest to rearrest him for the two murders he committed.

"This boy is well connected. He did not stay in one place for too long. Our informants would tell us that he is hiding at a particular place and when we got there we'd find that he was gone. He hid in most of the hostels in Gauteng because that's where his network of cronies were," Dlamini said.

He said they rearrested Thwala in Johannesburg after they received a tip-off that he was part of a gang that was planning to commit a robbery on September 4. "One of the guys who was part of his gang told us that he was there and they would be robbing a shop. That's when we pounced on him," Dlamini said.

Masondo said their hearts sank after they learnt that Thwala escaped again in December, moments before judgment could be handed down for the murders he committed.

"It was meant to be handed down at 2pm and this guy then told the court that he had a witness that [would] testify on his behalf and asked the matter to be adjourned.

An alleged hitman and taxi driver was arrested in hospital over the weekend in connection with the taxi-related shooting that left four people dead ...
News
3 years ago

Five minutes before his case resumed, this boy [Thwala] and Mcunukelwa pulled out a knife on a court orderly and made their way out of the court premises and ran off to Smal Street."

Dlamini said they felt helpless because they had to go back to the drawing board and re-strategise to recapture Thwala.

The pair found Thwala on April 4, just five days before judgment in his cases was expected to be handed down.

Masondo said they received a tip-off that he was in Tsakane, on the East Rand, with one of his girlfriends and would be vulnerable.

"We indeed found him at the location provided and found him in possession of two unlicensed firearms," he said. Dlamini described Thwala as a dangerous criminal who would not hesitate to kill.

"He is soft-spoken and very respectful but that's a mechanism he uses to disarm you. He is capable of doing anything and is impulsive," Dlamini said.

"One of his girlfriends, Thabile Nsele, was sentenced to two years in jail for being in contempt of court after she agreed to testify against him but later changed her mind after seeing him in the dock. She witnessed him killing someone."