Image: supplied Stapleton Road, west of Durban, is one of the many roads that is closed due to overnight flooding

Any amount of rainfall in Durban on Tuesday could lead to further flooding, as the ground is completely saturated.

The SA Weather Service told SowetanLIVE that a flooding alert issued Monday was still valid, although most of the warned-for heavy rain had lashed parts of the city overnight and early on Tuesday morning.

"Because of the ground being so saturated, any amount of rainfall could contribute to more flooding. Therefore the warning we have of rainfall and flooding is still valid," said forecaster Wayne Venter.

Already, more than two dozen people are feared dead in the flooding. Many workers and school pupils were forced to stay home due to flooded roads and waterlogged railway tracks. Mop-up efforts were hampered by the rain in many parts of the city. 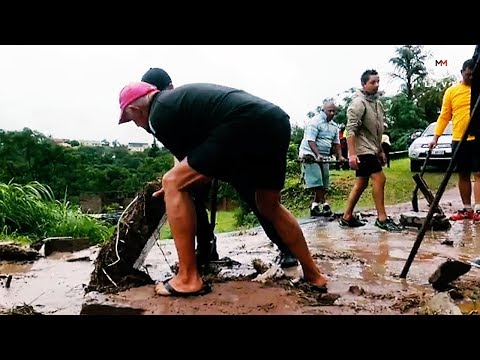 Venter said heavy rainfall during this time of year was a "common scenario in SA".

"The weather system that is at play is typical for this time of year. These systems do tend to produce heavy rainfall and flooding."

Venter predicted that the weather would begin to clear on Thursday. "There is a possibility of thunderstorms on Wednesday but there may be sunshine on Thursday."