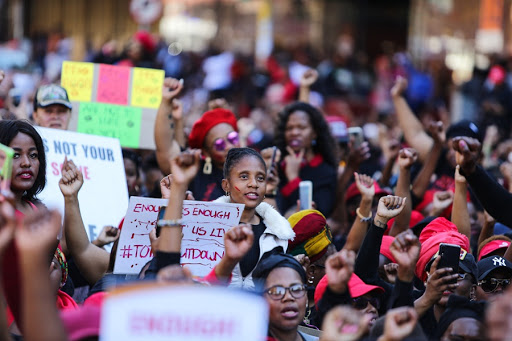 Marchers with raised fists following a moment of silence for the victims of rape and violence in Pretoria.
Image: Alaister Russell

A 36-year-old man will appear in the Butterwortth Magistrate’s Court on Tuesday for the alleged rape of a two-year-old girl, Eastern Cape police said.

The suspect was arrested in the town on Thursday.

"It is alleged that police received information that the suspect raped the victim on Wednesday, at about 5.30pm, inside a container where the suspect was selling his stuff along the corner of Bell and Grubb Streets, Butterworth," police said.

The Gauteng Department of Social Development (GDSD) has identified Baby M’s father as the man believed to have raped the then two-month-old.
News
3 years ago

They said the suspect would face a charge of rape.