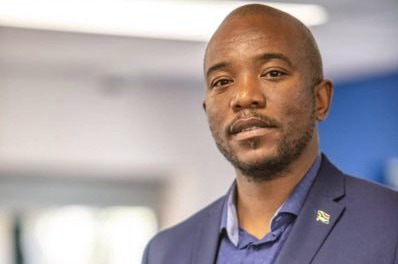 The ANC has dismissed the idea of a debate between DA leader Mmusi Maimane, above, and President Cyril Ramaphosa.
Image: Mmusi Maimane via Twitter

Chicken stock cubes. These are literally what DA leader Mmusi Maimane said would calm President Cyril Ramaphosa’s nerves and see him agreeing to a pre-election debate. Maimane said this as he reacted to the ANC’s dismissal of the debate between the two leaders.

Dear Mr President. This goes well with chickening out of debates. pic.twitter.com/vhoyYHjlZi

The idea of the debate was sparked by the SABC’s rebroadcast on Sunday of the 1994 pre-election debate between former presidents Nelson Mandela and FW de Klerk. The screening sparked conversations on social media about the current state of South Africa, prompting some to call for a debate between Ramaphosa and Maimane.

While the ruling ANC did not immediately respond to calls from the public for a debate, Maimane said he would be more than willing to take on the president.

ANC elections head Fikile Mbalula released a statement on Wednesday, in which he said the party would not be “cajoled” into a debate.

Maimane’s chicken stock cubes elicited mixed reactions. Some thought his post was funny, while others accused him of using Ramaphosa's name to campaign for the DA.

That is not how to get people to vote for your party Mmusi. No chance

Mr Maimane, it also goes well with chickening out of apologizing to Patricia De Lille as per the IEC ruling against your party for lying. When will you apologize to De Lille? #ApologizeToAuntyPat #IECRulingDA #DemocraticAlliance #MmusiMaimane @MmusiMaimane https://t.co/HpKsjIEsOJ

Mmusi is a huge joke shame

This is actually funny ???

What is this now? I just can't believe it, from mediocrity straight to the gutter. Let's grow up. Find a better way of encouraging each other to do the right thing for our country. Such continuous spectacles only serve to reflect the dearth of maturity amongst political parties

The ANC has poured cold water on claims that President Cyril Ramaphosa is going head-to-head with DA leader Mmusi Maimane in a pre-elections debate ...
News
3 years ago

The DA believes it will succeed in reviewing Monday’s decision made by the IEC following a complaint by former member Patricia de Lille.
News
3 years ago
Next Article