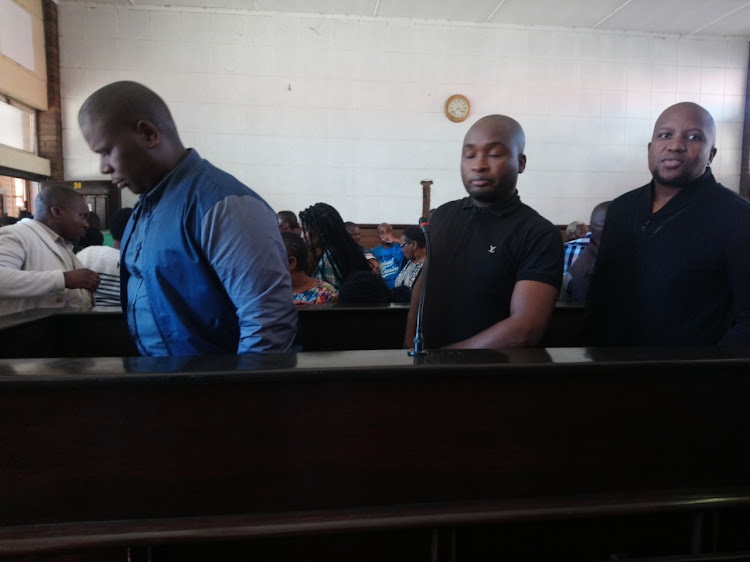 Sibonelo Myeza, Mbulelo Mpofana and Mxolisi Ncalane in the dock at the Umzimkhulu Magistrate's Court on Tuesday. They are charged with the murder of former ANCYL leader Sindiso Magaqa.
Image: Orrin Singh

The bail application for the three men accused of the 2017 murder of ANC Youth League (ANCYL) general secretary Sindiso Magaqa has been postponed to next week.

Sibonelo Myeza, a former cop and now a maritime operational manager, "tenderpreneur" Mbulelo Mpofana and Mlungisi Ncalane, also a former cop, appeared in the Umzimkhulu magistrate's court on Wednesday. They are charged with the murder of Magaqa and the attempted murders of councillors Jabu Msiya and Nontsikelelo Mafu.

Proceedings began at midday, when the state and defence both delivered their closing arguments.

The state highlighted that there would be a public outcry should the accused be granted bail, given the seriousness of the charges - along with the fact that the accused might also be linked to the murders of councillors Khaya Thobela and Mduduzi Tshibase, whose murders took place in Umzimkhulu in 2017, just one month apart.

The defence argued that the state's case was weak and lacked evidence, which resulted in charges being provisionally withdrawn against Harry Gwala district mayor Mluleki Ndobe and his municipal manager Zwelibanzi Sikhosana, who had also been implicated in the case.

The matter has been postponed until next week Thursday.