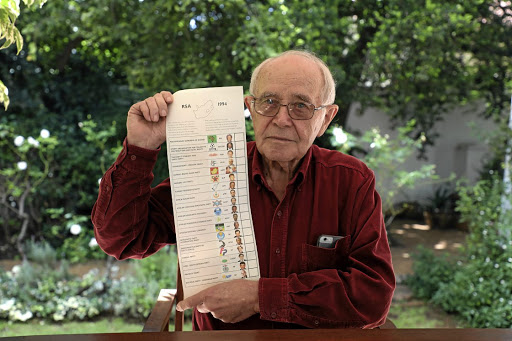 Eleven people sat down after New Year's Day in 1994 and faced the most difficult task of organising SA's very first democratic elections.

There was no budget, no staff to work with, little experience but just determination to make it happen.

Justice Johann Kriegler, who was appointed to head the first Independent Electoral Commission (IEC), was one of those people.

The date for the first democratic elections had been set for April 27 1994, and Kriegler faced an enormous task of organising them in four months. The Transitional Executive Council, set up by the National Party government and liberation movements, established the IEC in December 1993 to organise the elections.

We met Kriegler at his home in Parkview, Johannesburg, recently to reflect on the miracle he and the team pulled off.

25 years of freedom incomplete without transformation
Opinion
3 years ago

"It was unrealistic. Experts said it would take between two and four years to put together an election. There wasn't two to four years. [The] negotiation process had reached a stage where we needed to move on. We could not stop, it would have been politically disastrous," he said.

Kriegler was a judge of the Supreme Court of Appeal in Bloemfontein with no experience in running elections.

But Kriegler and his team were given the services of the department of home affairs but some political parties did not trust the department.

"We met for the first time after New Year's Day in 1994 and the first decision we took was that the election was going to take place on 27 April, come hell or high water. The date was not negotiable .

"It was engraved in stone and we were not going to interfere with it," he said. "We didn't have a budget. There was certainly no time to budget. We had no business plan. We had no time to sit down and work out a strategy. We started by writing regulations, textbooks for the staff and determining the electoral process. We had no guidance from home affairs. They were available but not trusted. In retrospect, I think it was a mistake not to have used them.

"It was an emergency process. It was a right of passage. It had to be gone through ..." 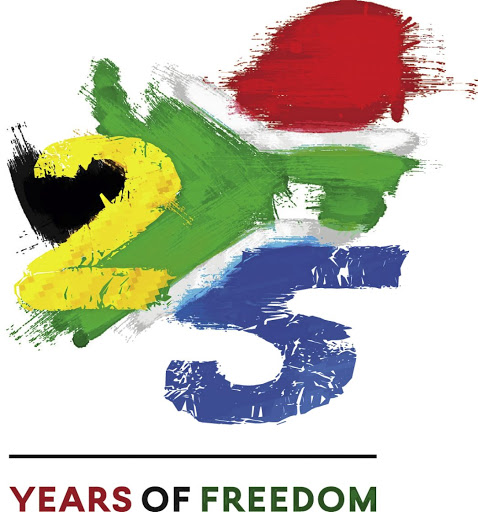 The secretary, director-general and senior staff of home affairs formed the backbone of the internal administration.

One of the biggest challenges for the IEC was that there were no accurate figures of people who were eligible to vote, which would enable the team to plan logistics.

There were also boycotts by the AWB and the IFP, which only agreed to participate a week before poll day. The IEC could not allocate polling stations in KwaZulu-Natal, Bophuthatswana and Ciskei bantustans which were self governing. Contingency plans were made in early February 1994 for the three areas in case they came on board, he said.

In KwaZulu-Natal 600 polling stations had to be set up a week before election day.

"Some we had to proclaim on voting day because we found that the people said 'hayi khona we're not going to vote in that place'," Kriegler recalled.

This caused problems for the IEC as political parties complained during counting that "people were voting at ghost polling stations". On a Saturday morning, 10 days before the polls, Kriegler was alerted to a man who wanted to see him in his office.

"In came a man as big as that wall, Washington Okumu, a political analyst from Kenya. He said he was on his way to KwaZulu to see Chief [Mangosuthu] Buthelezi and persuade him to join the electoral process. He wanted to know from us that if he were to join, would we still hold the elections. We said 'yes we can make a plan'," he said.

Okumu succeeded in persuading the IFP leader to take part in the elections. Fortunately for the IEC, the ballot paper had space at the bottom to place a sticker with the IFP logo, which had been designed.

The new-look ballot paper was then sent to England for printing. Ballot papers were then distributed to the 10,000 polling stations across SA. Since there was no voters' roll, the IEC had to make "an intelligent guess" to project the number of voters.

"Just about anybody who was an adult could vote. If you had an ID, fine. If you had a dompass, fine. If you did not have this, you had to get a voters card. The purpose of the election was reconciliation. That was the one main objective. We who had been divided . had made peace and we had to reconcile. I know that is unpopular among the young generation today. If you don't know war, you don't know how valuable peace is," Kriegler said. 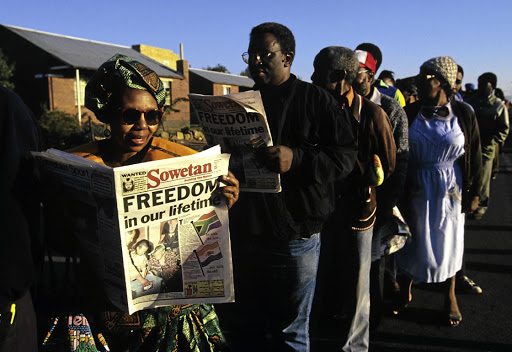 Millions voted in SA's first democratic general election in 1994, not withstanding the many challenges. Getty Images

Home affairs had to open seven days a week and more than 3-million temporary voting cards were issued for the election.

"No doubt, thousands of Zimbabweans and Mozambicans voted . In that kind of election, you let things go."

More than 19-million people voted on April 27 1994 with 4,000 international observers monitoring the process.

"The elections had to happen and they had to succeed. The alternative was disastrous . The country was extremely tense . We in the IEC were acutely aware of the immense responsibility upon us. The election is not the ballot and the counting. It is the whole atmosphere. It is the integrity of the process. The observers contributed materially to the integrity of the process."

On election day things really got complicated for the IEC. While the commission tried to "over-cater" by supplying more ballot papers than projected, that was still not enough in certain stations.

Voters were marked with an invisible ink, which could only be seen under an ultra-violet light. Providing equipment for this was a "nightmare".

"We ran out of ultra-violet lamps. We ran out of ink in some places. The ink had been made with a secret formula in the US. When we ran out of ink, we asked the police forensic laboratory and they made us a substitute within a couple of hours in labs in Pretoria. It was flown to many places by the air force," Kriegler said.

But the ink could not reach every corner of SA. "In some places we had to use water. Nobody ever found out. In other places they had ink but the lamps were broken."

Due to some glitches, voting was extended by a day and a half. Vote counting began immediately and it had its share of problems.

The counting took about 10 days. In some of the stations the counting staff went on strike demanding more money. The SA Council of Churches intervened to get workers back at work.

Having gone through all that drama, Nelson Mandela's inauguration was a special moment for Kriegler.

"I was on cloud nine. It was a magnificent day. I still get goose bumps when I think about it . I think it was the best day that the new SA has had."