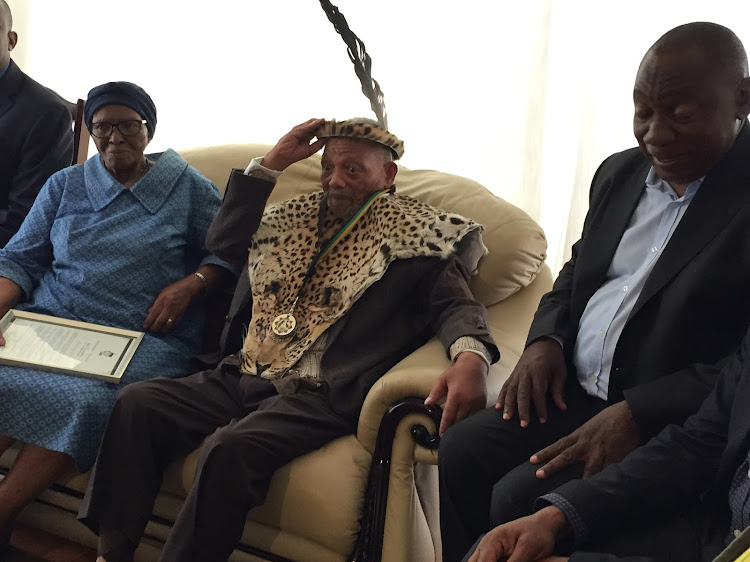 The ANC has bestowed an Isithwalandwe/Seaparankwe award upon Struggle stalwart John Nkadimeng who played a pivotal role during the days of apartheid.

Speaking at Nkadimeng's house in Bramley, Johannesburg, on Monday, ANC president Cyril Ramaphosa said the award befits him well as he was a selfless contributor to the party.

"We are giving you the Seaparankwe and you are going to be one of the very few in our movement to receive this. This is the highest recognition, as you know, and we thank you most profusely for the service you have given to our people," said Ramaphosa.

The president was accompanied by the party's top brass, with the exclusion of deputy president David Mabuza.

Nkadimeng quietly thanked the president for the prestigious award.

Speaking on behalf of the family, Shirley Nkadimeng welcomed the award which was  brought personally by the ANC top officials. She also thanked them for identifying her father with it while he was alive.

The ANC blames the moral decay and social ills in the country on apartheid.
News
3 years ago

Lessons in ethics will mean cleaner state
News
3 years ago

"Today we are so humbled to be in this occasion. It is very emotional for us and I think for my mom, father, brothers and sisters, to finally witness something as great as this accolade.

"It’s a few [people] that get bestowed with this kind of accolade and we really appreciate it. It just goes to show that the selfless contribution that my dad contributed to the Struggle for freedom has paid off.

Shirley is the last born of Nkadimeng's daughters.