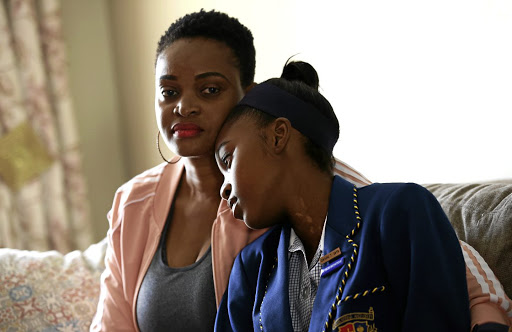 Ntshuxeko Mashele with her mother, Innocentia, at their Pretoria home this week.
Image: Masi Losi

SA's private schools have been accused of being exclusionary and elitist by using entrance tests to cherry-pick only the most intelligent pupils for enrolment - seemingly to secure good pass rates.

Last month, Pretoria West businesswoman Innocentia Mashele, 36, was left bitterly disappointed after Crawford College Pretoria said that her 12-year-old daughter, Ntshuxeko, "did not do well" in the entrance test.

Mashele, who was hoping to enrol Ntshuxeko in grade 8 next year, was asked to call the school in August to set a date for a re-test. "They only want children who are stars yet they are supposed to produce stars in children who are average," she said.

Her daughter, who is in grade 7, is enrolled at the private Loreto School Queenswood in Pretoria.

Be wary of world view 'good' schools give to your kid

About two years ago, I got into a tiff on Twitter with a private school franchise, a very popular one.
Opinion
2 years ago

Mashele said her daughter found some "difficult words" in the English oral test, and struggled with some of the maths questions as she had not been taught them at school.

Responding to Mashele's complaint, Crawford Schools managing director Morag Rees said the tests were used to determine whether a child was ready for a particular grade.

"Applicants who do not meet the requirements for the expected grade have the opportunity to write again later in the year as they may well have matured and mastered skills later."

Pupils who were found to still be not ready were offered a place in a lower grade, he said.

Guy Pearson, principal of Bishops Diocesan College in Cape Town, said its entrance exams were not used for "exclusionary" and "elitist" purposes but as one of many tools to select boys from a long list of applicants.

"It is a benchmark because not all of our feeder schools have the same standards."

Mike Russell, principal of Bridge House in Cape Town, where the school fee for matrics this year is R113,950, said the school has never administered entrance tests.

It had had a 100% matric pass rate since its first grade 12s sat the exam more than 20 years ago, he said. "We don't believe there is an advantage in what could be viewed as exclusionary."

Describing the admission tests as "elitist", Rob le Roux, principal of Westerford High in Cape Town, a public school, said these schools concentrate on selecting only top academic achievers "so that their matric results look great".

The criticism also comes in the wake of recent amendments to admission regulations by the Gauteng education department which ban school governing bodies from subjecting new scholars to such tests.

Though admission tests have been outlawed by the South African Schools Act, many private schools still administer them, especially in English and maths.

Bailey Blake, the head of schools for private education chain Spark Schools, said the group did not administer entrance tests as they have no real benefit.

The cost of education will continue to increase, and affordability and financial management should be the guide parents use when deciding on a ...
Business
2 years ago

"Entrance tests bias the enrolment process and give schools an opportunity to 'cherry-pick' children for enrolment."

More than 10,000 pupils attend 21 Spark schools in Gauteng and the Western Cape.

Curro Holdings CEO Andries Greyling said though some Curro schools used admission tests, "no child will ever be denied admission based on the outcome of this test. It is purely to determine academic ability in order to identify any possible academic shortcomings and to determine if the school can indeed support the child if major scholastic issues are identified."

The school did not administer entrance tests and this resulted in a broad diversity of academic abilities, he said.

With excitement bubbling ahead of the official announcement of their final-year exam results, basic education minister Angie Motshekga on Thursday ...
News
2 years ago

"If you 'filter' at the admissions stage you have much greater control over what your final academic results will look like when those students matriculate. We are proud of what we can achieve with a boy with a good attitude who works hard but for whom academics is not his key strength."

Tim Nuttall, rector of St Stithians College in Johannesburg, said it did not administer entrance exams, as such an approach heightens student anxiety and results in a "coaching for the test" mentality.

"Students applying for grade 8 come from a large number of schools and have varied curricular experiences. A standardised test is not fair or inclusive."

Lebogang Montjane, executive director of the Independent Schools Association of Southern Africa, said the admission test should never be used as the "sole determinant" for entry.