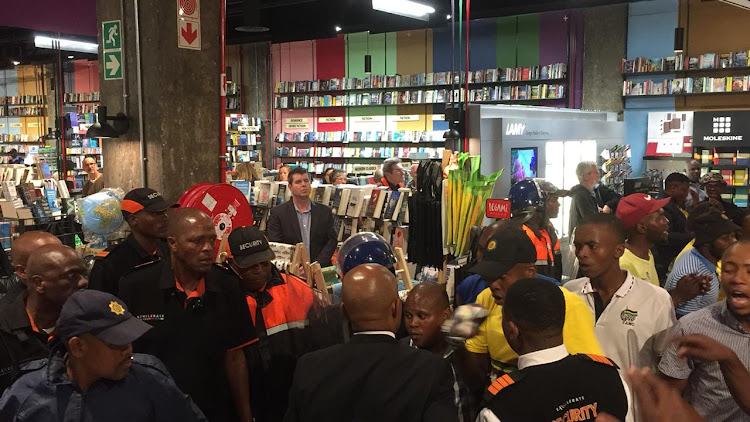 A group, said to be from the ANC in the Free State, brought the book’s launch to a standstill as they stormed Exclusive Books in Sandton on Tuesday night. Their presence forced the removal of copies of the book from the shelves.

The book, among other allegations, questions Magashule's struggle credentials.

The DA’s Free State premier candidate Patricia Kopane said they had spotted Ward 19 councillor Alexis Mare and Ward 6 councillor Mahadi Nkheloane in pictures that emerged following the disruption and will be laying criminal charges against them.

“This thuggish act is a direct contravention of the Municipal System Act that regulates the conduct of the councillors. According to the Act, councillors are expected to perform their duties in good faith (or with a desire to act fairly towards others), honestly, transparently and in the best interests of the municipality,” Kopane said on Wednesday.

“The DA will also be writing to the Metsimaholo council speaker, Cllr Thabo Mabasa, to lodge a complaint about their thuggish act and ask him to take action against them for bringing the council into disrepute.”

Kopane said they would also seek the removal of the councillors from office.

“Their behaviour is a clear indication of how far the ANC is willing to go in silencing the truth, they are desperately trying to hide the unmasking of the alleged state captor Ace Magashule, who brought the Free State to its knees.

“This also shows that Magashule is still in control of this province and is still using his mafia-like tactics to run his criminal syndicate.”

ANC’s provincial secretary in the Free State Paseka Nompondo had not responded to our messages and calls by the time of publishing.

The uproar sparked by the storming of the book launch has forced the ANC to release three statements in a space of 24 hours denouncing the very same acts.

One statement, which came directly from Magashule’s office, said party members should “desist” from being unruly in his name while one statement released on Wednesday by spokesperson Dakota Legoete, the said ANC  was disgusted by the disruption of the launch as well as the planned event to burn copies of Myburgh’s book.

SACP general secretary Blade Nzimande has hit out at ANCYL members from the Free State who interrupted the book launch of Pieter-Louis Myburgh, ...
News
3 years ago

“The freedom of expression is a principle we fought for, that many died for, and which is sacrosanct in our young democracy,” ANC said in a statement.

“In democratic society, freedom of expression can only be guaranteed when we protect the rights of those we disagree with.”

The party also said the members who disrupted the book launch would be disciplined “if they are found to be our members”.

“The ANC has since engaged with the ANC Youth League in the Free State, and they have now gone public to retract their statements and cancelled this disgusting book-burning event.”

EFF leader Julius Malema said nothing warranted the act regardless of how much the league disagreed with the contents of the book.

“It doesn’t matter how we disagree, there’s a book written about me called the "Inconvenient Youth". We never burned that book, we never called for its banning –in a sense that it must not be published and burning in a sense of flames; we never said set fire on it,” Malema said adding that people ought to read books of those they disagree with.

He accused the leadership of the ANC of turning a blind eye to the ‘well-planned thuggery’.

“…. so that is thuggery, it is orchestrated, it’s well-planned, the leadership of the ANC is well aware of it.”

Investigative journalist and author Pieter-Louis Myburgh says he will not be deterred by disruptions and the tearing up of his book, Gangster State: ...
News
3 years ago

The ANC Youth League in the Free State has cancelled its plan to hold a book-burning protest against Pieter-Louis Myburgh's expose Gangster State: ...
News
3 years ago
Next Article