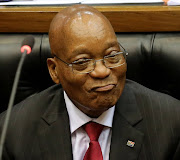 Former president Jacob Zuma has broken his silence about weekend reports alleging that he secretly moved millions of US dollars belonging to late Libyan dictator Muammar Gaddafi from his Nkandla compound to Eswatini.

The Sunday Times reported that South African agents tipped President Cyril Ramaphosa off about the stash being moved to Eswatini earlier this year.

Despite failing to respond to questions sent by the paper‚ Zuma went on Twitter on Tuesday morning and denied the claims.

However‚ King Mswati is said to have admitted the existence of the money when he met Ramaphosa at OR Tambo International Airport two weeks ago.

The money‚ said to be $30m (about R422m) in cash‚ was said to have been transported out of King Shaka airport in Durban bound for Eswatini‚ where it was to be stored by the Central Bank of Eswatini.

The cash pile is said to have been given to Zuma by the Libyan leader for safekeeping shortly before he was killed in October 2011.