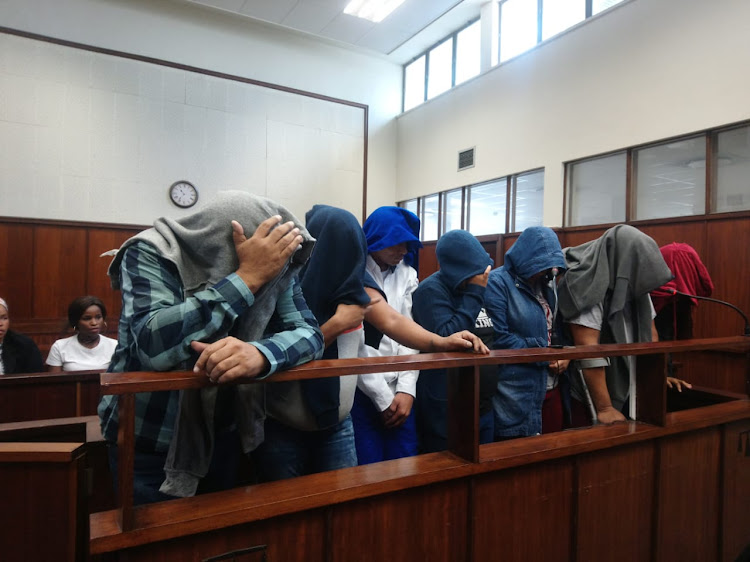 Seven people appeared in the Durban Magistrate's Court on Tuesday in connection with a R50m drug bust.
Image: ORRIN SINGH

Seven people accused of manufacturing and dealing in heroin and mandrax following a R50m drug bust were under the impression that they would be manufacturing tablets for the treatment of HIV and cancer.

Defence attorneys Ridwan Sayed, representing Abrahams, and Kiran Subajan, representing the rest of the accused, read out affidavits in court highlighting exceptional circumstances as to why their clients should be granted bail.

While the affidavits varied in their contents, one key factor was constant - that the accused were hired under the pretext that they would be working at a manufacturing plant for anti-retrovirals (ARVs) and tablets for cancer treatment. It was also stated that they would be paid between R4,000 and R6,000 a month.

The 7 people accused accused of manufacturing and dealing in heroin and Mandrax following a R50m drug bust in Durban have appeared in the Durban Mag Court @TimesLIVE pic.twitter.com/EopGYsyHRm

All of the accused said they were from Cape Town and went to Durban for the job opportunity.

Abrahams noted in his affidavit that he was recruited by a man named "Ismail Chetty" who said that if he got six more people he could earn R6,000 working at a manufacturing plant in Durban.

They all intend to plead not guilty.

The matter was stood down until after lunch, when magistrate Vanitha Armu was expected to make a decision about bail.

The accused were arrested on March 1 during a swoop by members of the provincial organised crime unit at two separate locations - a massive drug manufacturing laboratory in Springfield Park and a plush home in Westville.

Police have made yet another massive drug bust in Durban, this time in the quiet suburb of Westville
News
2 years ago

Seven people who were arrested earlier this month in connection with a R50m drug bust are expected to appear in the Durban Magistrate's Court on ...
News
2 years ago
Next Article