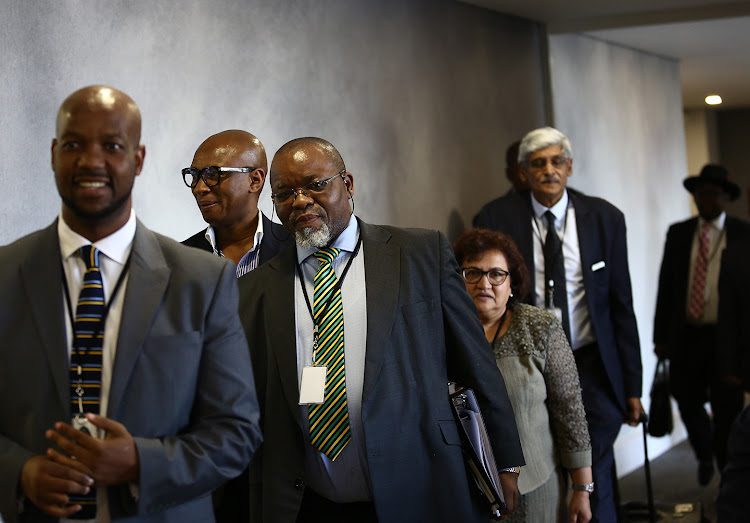 ANC Chairperson, Gwede Mantashe followed by Zizi Kodwa, who are among 30 party members whose candidacy for parliament and provincial legislatures has been objected to
Image: Masi Losi

Disgruntled members of political parties and the public who have called for the removal of certain candidates from nomination lists to the National Assembly and provincial legislatures have been dealt a blow.

This follows an announcement by the Independent Electoral Commission on Tuesday that only the courts had the authority to remove the candidates from the lists.

"Many of the objections we received were objections that said 'there are these allegations about them or a person'. The law says there must be a conviction and somebody must have been sentenced to imprisonment without an option of a fine," said the IEC's chief electoral officer Mosotho Moepya.

"The complaints that we received followed a process of investigation and we have got to allow parties to make representations and in some of these matters, complications arise and we have to look at them to the point that we are confident that what we have dealt with, we have dealt with fairly," said Moepya.

His remarks follow the ANC's claims that it has the jurisdiction to withdraw candidates from its nomination lists submitted to the commission last month amid mounting pressure for the party to remove at least four names of former and current ministers who have been found guilty by the courts and have lied under oath, among others.

The IEC said it received 53 objections but only one was upheld. The Pan Africanist Congress's Seropane Alton Mphethi was disqualified from being on the list as he was sentenced to 18 months' imprisonment without an option of a fine in June 7 2016.

Moepya said from the IEC's point of view, the candidates that the commission has, unless reviewed by the courts, are all going to the elections. The commission said it received 29 objections pertaining to ANC candidates, 19 against BLF, 13 against the EFF and four against the DA and Land Party.

Only one out of the total 53 objections by the public to party candidates submitted to the IEC has been upheld.
News
3 years ago

IEC has informed the ANC that all the objections submitted against their candidates have been dismissed.
News
3 years ago

"The commission dismissed all other objections for failing to meet the constitutional and statutory criteria. The majority of these objections related to unproven allegations," said Moepya.

"Despite many of the objections not meeting the prescribed format for submission, the commission decided in the interests of promoting fair elections to consider whether substantively these objections met the criteria in the constitution," he said.

On Monday, ANC's election head Fikile Mbalula said the party could remove names from the lists if the integrity commission chaired by George Mashamba asked them to do so.

SowetanLIVE understands that the committee is currently vetting the lists. The likes of minister for women in the presidency Bathabile Dlamini, environmental affairs minister Nomvula Mokonyane and former finance minister Malusi Gigaba, among others, face a number of court judgments and allegations against them.

Mbalula told reporters that the commission's decision has to be respected if it recommends that some of the party’s tainted candidates on lists must step aside.