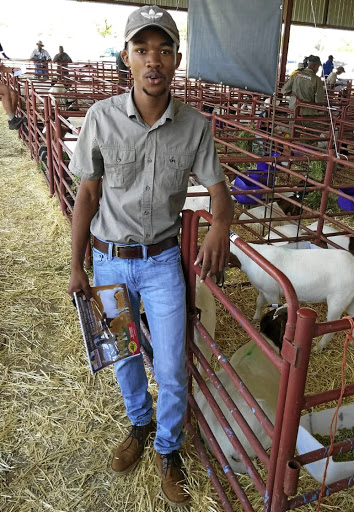 Farm owner Nasi Thabo Herman is putting all his focus on what he loves and does best. / Supplied

While his mates are furthering studies at university, 19-year-old Nasi Thabo Herman has his heart pinned on farming and growing his grandfather's legacy.

Born in Mokopane in Limpopo but raised in Morokweng in North West, Herman can easily be one of the country's successful youngest farmers.

He runs his 970-hectare Constable Farm - home to cows, sheep and goats - and sells the animals to people in Pomfret, 100km from Morokweng.

Since the tender age of three, Herman used to help his grandfather milk the cows. At that time, his grandfather, Nasi Dithakgwe, owned a communal farm where he bred his animals.

"That is where the love and the passion grew. I learnt everything from there, even riding a donkey," he said.

After his grandfather passed away in 2003, his father, Headman Dithakgwe, and uncles took over and operated the farming business.

Former security guard Noncedo Khawuleza-Ndzawuse started farming three years ago with only three pigs. Today she has 30.
Business
3 years ago

He said they continued grooming and teaching him all about the farming business while he was at school.

"Farming is my life. I spent most of my school holidays and weekends here on the farm."

In 2014, his father gifted him a pregnant heifer. "It gave birth to a young bull. I raised it from my own pocket and after 18 months, I sold it to a local farmer in Morokweng."

In 2015, Herman, his father and uncles won a land claim under Barolong Boo Maiketso Communal Property Association from the government. That was how the family became the proud owners of Constable Farm.

"I am currently investing only on South African breeds as it makes it easier for me to sell at a reasonable price to my customer," he said.

He said many people told him he was matured for his age. "I am not surprised, this is a tribute to my grandfather. I was named after him and we share a birth date as well.

"I want my children to carry it over [farming]. It's actually a tradition in our family," he said.

Herman's life revolves around the farm. "I wake up and ride a horse, checking the soil, water and basic maintenance of the animals. There is always something to do, work does not end. It's a way of life, I am doing something I love."

Herman encourages young people interested in farming to love what they do. "Its not about the money. Money is like a horse, if you run after it, it will run away.

"You should always know that if you do something you love and have passion for it, the money will always come to you."