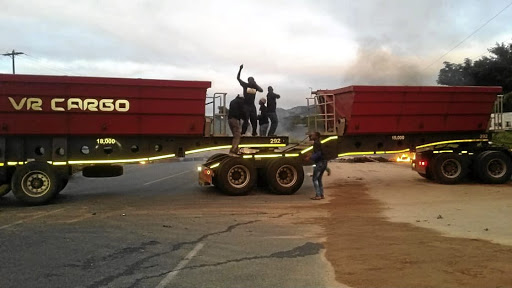 A group of youth use a truck to barricade a road over the demolition of houses at Nomzamo Park.
Image: Mandla Khoza

The community of Nomzamo Mandela outside Mbombela, Mpumalanga, which illegally occupied land after they claimed to have "received a signal" from the late Struggle icon Winnie Madikizela-Mandela, have been left out in the cold.

The group made up mostly of young people started occupying the land outside the city, claiming late Madikizela-Mandela had given them a signal to do so.

The group responded to the demolitions by blockading roads with burning tyres and tree trunks, closing roads to Thekwane and KaNyamzane townships and the Kruger Mpumalanga International Airport.

Community spokesperson, Sylvester Hlatshwayo, blamed the government for their situation.

A 23-year-old man was shot and killed, allegedly by an Ekurhuleni Metro Police Department (EMPD) officer during a violent eviction from an invaded ...
News
2 years ago

"This government of ours which we voted for is demolishing our houses knowing fully well that these young people tried to build those houses for themselves instead of asking for RDP houses.

"They don't care about us; they even used a fake court order to demolish our houses. The order was not brought by the sheriff of the court but some officials from the municipality," Hlatshwayo said.

He said they were prepared to die for the land they had occupied.

"They better kill us all; we are going nowhere... the land belongs to us. As young people, we can't be slaves in our own country while other people are enjoying (their freedom).

"We are young, we can't afford to rent (flats or houses) in town or buy houses but we can build houses for ourselves. Can't this government see that we are helping them? We dare them to touch us, hell will break loose; they will be sorry," said Hlatshwayo.

The group had forcefully occupied the land last year, saying they were tired of staying in backyards of their family homes. They also complained that stands were expensive and unaffordable.

It took just three weeks for the land invaders to build houses in the area.

These people know that the reason they have land in South Africa is because Africans were dispossessed.
Opinion
3 years ago

The municipality said the municipality-owned land was earmarked for development. The municipality went ahead with demolitions after the residents failed to vacate the piece of land in 48 hours as stipulated by the court order which was served on them last Friday.

Residents marched to municipal offices but no one came out to meet them or accept their memorandum.

Municipality spokesperson Joseph Ngala said they had to enforce the court order because the people didn't want to move.

"You know when you talk to people and you try all [avenues] to give them time to vacate and they don't, the only option is to demolish, which is what we did after the court order was received and served," Ngala said. He denied the claim that the court order was fake.

By late afternoon, the community had moved back to the area despite a high police presence.

"We know that these politicians have sold the land to some white guys. We will show them that we can't be played by them as we are the government in our own right," said resident Themba Shongwe. He threatened a heightened chaos if the government insisted on moving them off the land.