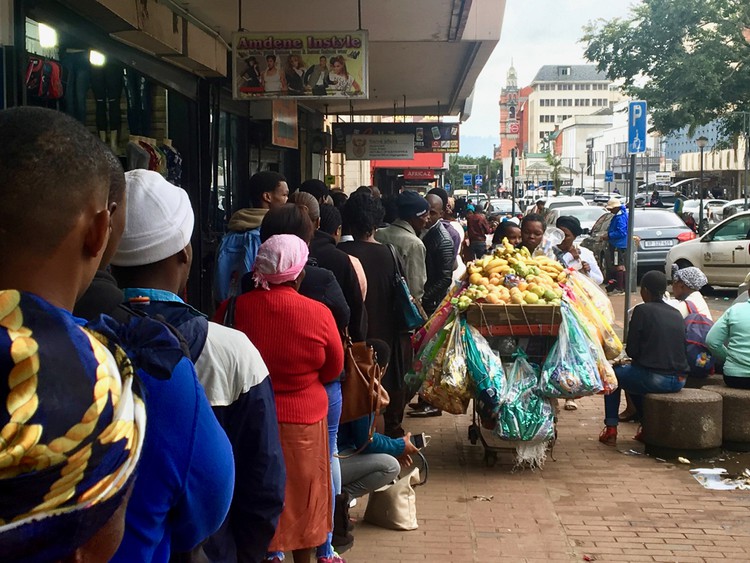 At home affairs in Pietermaritzburg, you can get to the front of the queue if you pay R300.
Image: groundUp/Nompendulo Ngubane

At the home affairs offices in Pietermaritzburg, you can get to the front of the queue if you pay R300.

"We stand for you in the queue and you have to pay us R300," GroundUp was told by a woman who was part of a group sitting on the side of the road outside the Church Street offices of home affairs.

GroundUp visited the offices after hearing complaints by residents that they were being forced to pay R300 in order to be attended to at home affairs.

"If you don't have R300 to pay, you don't exist," said Zanele Zindela from Imbali. She said she had been told that she would "be a regular visitor" if she didn’t pay the R300 queue-jumping fee.

Those who pay jump ahead of others who may have arrived as early as 4:30am. The money is paid to a group of women who stand outside the offices.

Zindela said it was her third visit to get her ID. "I came on Monday before dawn. I was number 38 in the queue. The queue was not moving. I noticed a group of six or 10 people … They did not stand in the queue. People were arriving and speaking to these ladies; the next thing they would go inside. About 10 groups came and did this," said Zindela.

Home affairs staffer with a difference

Nosipho Mkhupheka is a public servant who has set tongues wagging for all the right reasons.
News
3 years ago

She said she went to one of the women to ask what was going on. "She told me that those people had paid their money to get inside. She said if I don’t pay, I will keep on coming back for days.

"I waited at the offices until 3pm. Then home affairs told us they were closing the offices. We had no choice but to go back home. I returned on Tuesday. The same thing happened – people who had paid were jumping ahead of us. It's the third time today … I won't get inside because I have no money to bribe," said Zindela.

GroundUp spoke to a woman Zindela pointed out. She was sitting outside the offices with a group of women drinking Smirnoff vodka in white tumblers. She told GroundUp that to get to the front of the queue a fee of R300 must be paid on the day. Another woman was taking down the names and contact details of those who had paid.

"We wake up for you and get you the closest space," she told GroundUp. "You need to come to the offices around 7am. Just come by the door and you will see me there. I will be waiting for you already. Don't worry about people. They won't bother you. Come straight to me with the money and you will get inside. We take R300 from each person, then things will be sorted. You will get inside and be served earlier and go home," said the woman.

GroundUp spoke to people in the longest queue, some of whom said they were aware of the R300 "fee".

Malusi Gigaba’s decision to grant the Gupta family citizenship was "incorrect" and should be looked into by the state-capture inquiry.
News
3 years ago

Slindile Zondi said she had taken leave from work to get her ID. "I lost my ID. I’m here for a new one so that I can vote next month. Someone told me that I should look for ladies with name tags. I went to one of the women. She told me they need R300 to push me to the front. She was clear that if I don’t have the money, I will keep on coming back. I will have to raise the money next week. They won’t give me more leave at work. I have no choice but to pay," said Zondi.

Two elderly women who said they were sisters from Mafunze were standing in the queue for IDs. Victoria Majozi said she had been told about the R300 by a man in the queue. "The price is very high and I cannot afford it. I'm going back home," she said.

Home affairs Pietermaritzburg office manager Xolani Maphumulo said he was aware of what was happening outside the office. He said the department had issued a circular that agents could stand in a queue for one person, especially the elderly.

"It was a harmless system that was introduced to try to help people, but some people saw this as a business opportunity. The department did not mention anything about payments.

"Once a complaint is laid and the person is identified I go outside and sort the matter out myself."

He said there were also complaints from the offices in Durban. "Unfortunately there’s not much we can do as these occurrences happen outside the offices."