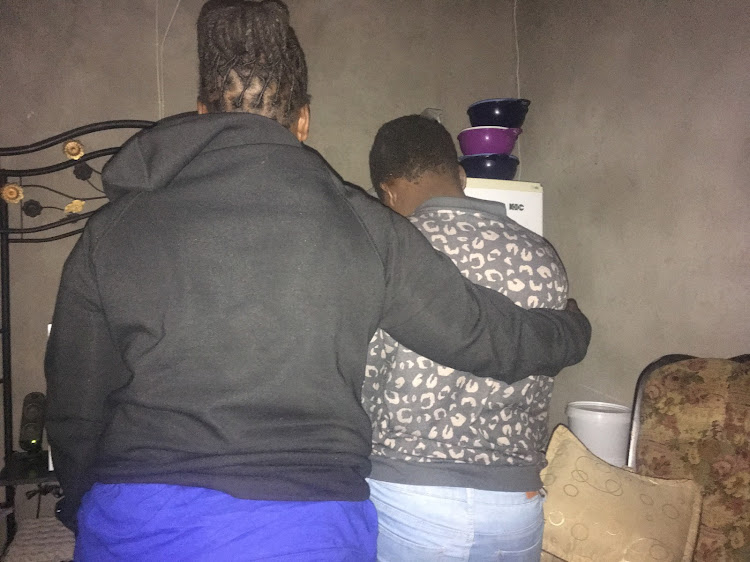 A Mpumalanga teenager who went missing after she was allegedly raped by her uncle is being comforted by her mother after the girl was found this week.
Image: Mandla Khoza

A Mpumalanga teenager who was allegedly raped by her uncle and aunt’s boyfriend has been found after she fled home and sought refuge at her boyfriend’s house.

The girl, 13, from KaNyamazane outside Mbombela went missing on Wednesday and was found in the home of her boyfriend, 15.

The boy lives with his siblings.

Provincial police spokesman Brig Leonard Hlathi said police received information that she was with her boyfriend.

“This child is a key witness in our case and we are happy that we have found her. That is why we had to search for her for the entire time until the morning when we made a breakthrough.

A woman who was caught raping her 10-year-old male cousin after a birthday party has received a life sentence‚ police said on Wednesday.
News
2 years ago

“We wanted to open a case against the boy but the girl told us that she was in a love relationship with the boy. “We have taken both of them for counseling. The girl will have to stand in court and testify about the ordeal that happened to her at home,” said Hlathi.

Police said the girl fell pregnant as a result of the rapes and that her aunt and grandmother had told her not to tell anyone about the incidents. They are alleged to have given her abortion pills and later disposed of the foetus.

The girl’s mother, who can not be named to protect her daughter’s identity, said she feared for her daughter’ life.

“This is very scary, my child was abused and gets missing I thought those people from her family had kidnapped her at first because they once tried to kill her after her uncle was arrested.“She needs more protection because in all this she’s a victim because of what happened to her,” said the mother.

The uncle was arrested on October 20 after the rape of the victim and is still been in police custody.

According to the teen during an interview with Sowetan earlier this year she alleged that after the rape, her uncle told her that he was HIV positive.