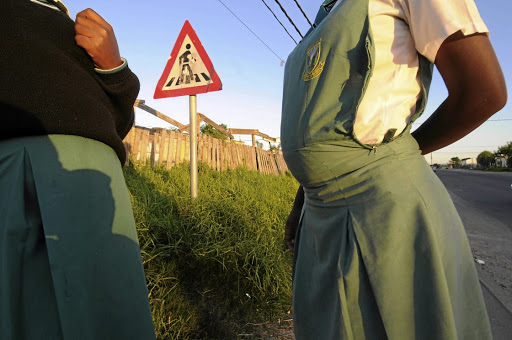 A principal at a Daveyton high school has been suspended.
Image: MICHAEL PINYANA

Gauteng education MEC Panyaza Lesufi on Thursday confirmed the suspension with immediate effect of a principal at a high school in Daveyton, East Rand, after he allegedly impregnated two pupils.

"The principal was served with a letter of suspension this morning after a process that was implemented," said Lesufi during a visit to the school, adding that an acting principal has been appointed to take over the responsibilities of the headmaster from Friday.

"We are releasing a social team to trace the girls and their families to verify the allegations, and to assist them where it is needed."

Picketing EFF members, who have been demanding for action to be taken, cheered as the police escorted the principal out of school premises. EFF spokesperson Sipho Watkins said: "This man has taken advantage of young girls in the school and as community leaders we demanded for his immediate suspension after we received the information."

Watkins said the complaints from parents and some community members started over three months ago but nothing had been done until today.

"We took it upon ourselves as parents, [EFF] leadership and [the] community to expose this. This must never happen again. We will make sure that we always protect the girl child because she holds the future of our nation."

Schoolboys raped girl of 13 while others videotaped her ordeal

Two schoolboys have been arrested after they allegedly raped a fellow pupil at a school in Reiger Park‚ Boksburg.
News
2 years ago

Three boys have been suspended from a Soweto school and are facing a court case following a charge of rape being opened with police.
News
2 years ago

The Gauteng Department of Education said it would leave no stone unturned after a Soweto Grade 8 pupil was allegedly raped by three classmates during ...
News
2 years ago
Next Article