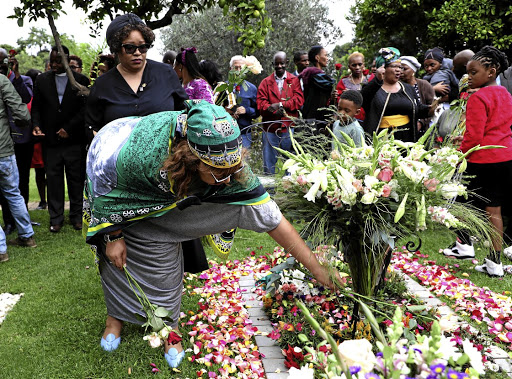 Zenani and Zindzi Mandela at a wreath- laying ceremony of their mother.
Image: SANDILE NDLOVU

Speaking to Sowetan on the sidelines of the ceremony to commemorate the first anniversary of Madikizela-
Mandela's death, Zindzi said the party had not done enough to honour her mother.

Her comments came two days after a picture of her and her sister Zenani posing with EFF chairperson Dali Mpofu, and sharing an EFF cap, led to speculation that the sisters had dumped the ANC.

However, at the Fourways Memorial Park Cemetery yesterday, Zenani arrived draped in ANC regalia and later posted pictures on social media in ANC attire and doing the Amandla salute. It was, however, curious that at the cemetery, no recognisable ANC leader was present and yet the EFF was represented by its leader Julius Malema.

Speaking to Sowetan, Zindzi said: "I think the ANC needs to do more and as she said, 'I am the ANC', she is the ANC and so the only way to uphold her legacy is to live true to her values."

She added that Madikizela-Mandela "always spoke truth to power and she always believed in corrective measures, had specific solutions and she was always very frank to her party when she saw things going wrong".

EFF leader Julius Malema has lambasted the ANC for failing struggle icon Mama Winnie Madikizela-Mandela and has promised to rectify that come the ...
News
3 years ago

The absence of the ANC at the cemetery fuelled speculation of a disagreement between the party and the sisters about how the organisation handled the parliamentary debate on the renaming of the Cape Town International Airport after Madikizela-Mandela.

After the wreath-laying ceremony, Malema accused the ANC of showing disrespect to the Struggle icon.

"The ANC continues to fail her even in her grave. You heard the debate on the renaming of the airport where there were speeches to the effect that she was not tried and tested person and not deserving of the airport being named after her," Malema said.

ANC spokesperson Dakota Legoete defended the party's failure to have a major event to honour Madikizela-Mandela.

"There is no official event scheduled. All events are done sporadically throughout the country from our branches and in the women's league."

ANCWL secretary-general Meokgo Matuba said the league remembered her by canvassing votes for the ANC. She said they gave the family "space as a family" to remember their mother. "We are in a campaign. In this campaign we have remembered her. We had a moment of silence for her. We are continuing with our campaign because we know that Mama Winnie wants the ANC to win elections," Matuba said.