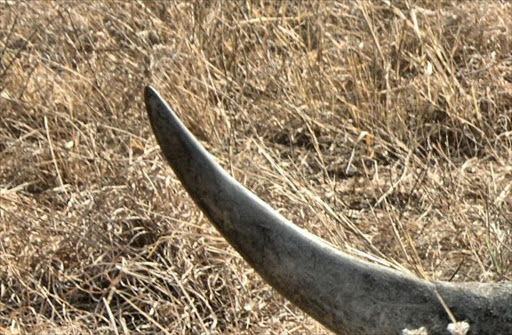 According to police, the 43-year old suspect was in possession of two rhino horns valued at about R1.8m.
Image: Reuben Goldberg

A 43-year-old man is expected to appear in the Boksburg Magistrate's Court on Wednesday‚ charged with illegal possession of rhino horns.

Capt Ndivhuwo Mulamu of the Hawks said in a statement that the suspect was arrested on Monday on the R21 near OR Tambo International Airport by the Ekurhuleni tactical response team and the Benoni flying squad.

He was in possession of two rhino horns valued at about R1.8m.

The police also seized the vehicle he was driving.

Police on Monday evening arrested two suspects aged 36 and 40 years at the OR Tambo International airport with 10 pieces of rhino horn worth an ...
News
3 years ago

In February‚ the environmental affairs department said rhino poaching cases had decreased from 1‚028 in 2017 to 769 last year.

It was the first time in five years that fewer than 1‚000 rhino had been poached‚ and the third year in a row where the number of cases had declined.

However‚ elephant poaching was on the increase‚ the department said.

"A total of 71 elephants were poached in the Kruger National Park between January 1 and December 31 2018‚" the department said.

"One elephant was killed in KwaZulu-Natal‚ which brings the total for South Africa to 72 elephants for 2018."

The department added that "specific risk areas have been identified" and strategies to deal with this changing poaching threat were being adapted and implemented.

In 2017‚ 68 elephant were poached across the country. Again‚ all but one were killed in the Kruger National Park.