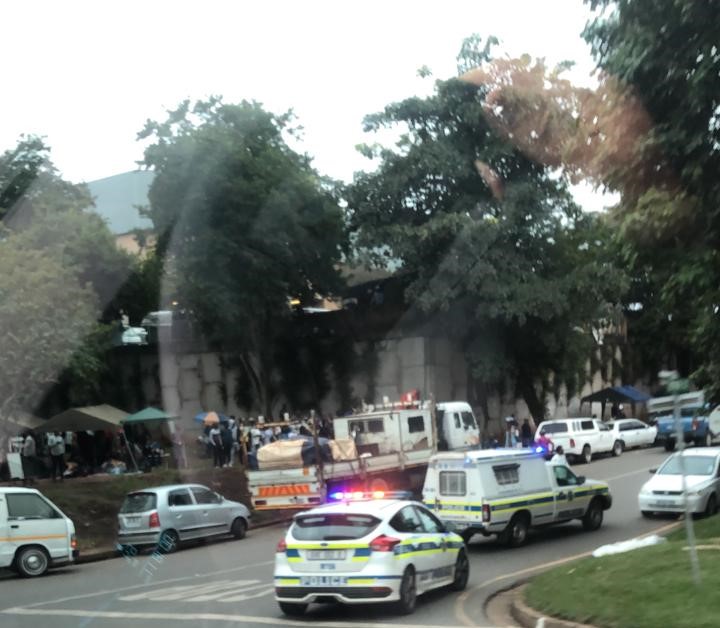 Police closed in on the Biyela Centre in Empangeni, northern KZN, following what is suspected to be a botched cash-in-transit heist on Tuesday.
Image: Supplied

Two suspects have been arrested following what is believed to have been a botched cash-in-transit (CIT) heist at a shopping centre in Empangeni, northern KwaZulu-Natal.

According to an officer at the scene, one of the suspects was shot in the body after he came under fire.

"The CIT guards were delivering the money at the Biyela Centre in Empangeni when one of the suspects who had been walking by produced a gun and cocked it. We are not sure if they were intending to rob the guards or to rob the shop," the officer told SowetanLIVE.

Botched #CITHeist at Biyela Centre in #Empangeni, in northern KZN, a short while ago - the centre is situated across the road from the police station - two suspects have been apprehended @TimesLIVE

Police spokesperson Lt-Col Thulani Zwane confirmed the incident but said he would not comment.

He referred SowetanLIVE to national police spokesperson Brig Vishnu Naidoo, who could not immediately be reached.

Two suspects have been arrested following what is believed to have been a botched #CIT heist at a shopping centre in #Empangeni in northern #KZN. One of the suspects sustained a gun shot wound to the body after a CIT guard opened fire on him. @TimesLIVE pic.twitter.com/8RmAKcJsOW