The death of a 30-year-old woman from KwaZulu-Natal has shaken the public after she went missing last week and was later found dead.

Friends and family had posted her photos on social media in a plea to find Dawny Philile Mhlongo, who was allegedly last seen near Unilever in the Ntuzuma area last Wednesday afternoon.

According to the police, Mhlongo was last seen taking an Uber after she had told a friend she had requested one.

Police spokesperson Lieutenant-Colonel Thulani Zwane said the body was found at Siphingo with gunshot wounds to her head and body.

“A missing person’s case had already been opened by her family.” 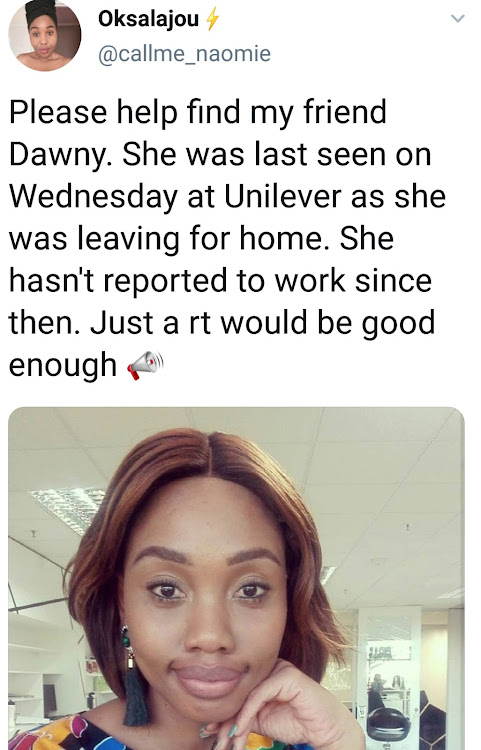 He said Mhlongo went missing on March 27 and was found later that day.

“However, the police had recorded her as an unknown person because no one in that area knew who she was until her family was located.”

Zwane told Sowetan that the family had identified the body and confirmed that it was her.

He said a murder case had been opened and the investigation for the motive of death was under way.

Mhlongo’s cousin, who did not want to be named, said the family had last seen her on Wednesday.

“We realised she was missing last week so we posted the information that we had on social media with the help of her friends. There was no lead up until Monday when the family found her at the mortuary,” she said.

She said the family was shocked and confused.

“We are all wondering who could be so cruel to do such a thing.”