HIV patient files lie on the floor of disused clinic 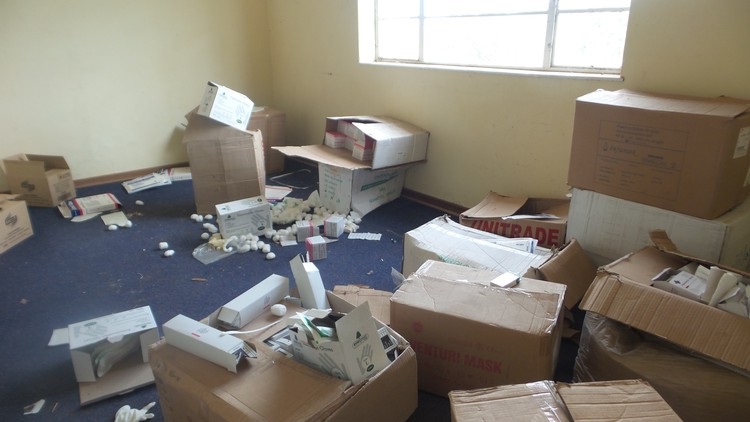 Medicines, patient files and medical equipment are strewn across the floors of the Emmanuel Haven Wellness Centre. In some of the photos we took (but have not published), patient names can be seen on the files.
Image: Joseph Chirume

The medical files of patients with HIV have been left dumped on the floor of a closed HIV treatment centre in Port Elizabeth.

The names of the patients are visible. There are also boxes of medicines strewn across rooms of the building.

The Emmanuel Haven Wellness Centre in Motherwell was founded in 2000. It treated many patients with HIV. In 2017 the Department of Health shut it down‚ citing safety reasons. The patients were transferred to state facilities to continue with their treatment.

The National Association of People Living with AIDS (NAPWA) and the Masibambane African Action Group were two organisations running the facility‚ according to a former volunteer at the centre. We have been unable to contact them.

NAPWA’s telephone numbers on its website are not working. Masibambane did not respond to us.

Patients attended to in open after clinic is shut

Nurses are forced to attend to patients under trees while those in need of chronic medication are turned away from a clinic in Mpumalanga. This was ...
News
4 years ago

A security guard said the building had been vandalized on several occasions‚ and stripped during burglaries.

It was only in February this year that a company was contracted to protect the place but there is almost nothing left to guard‚ he said.

“The files have important information and I don’t think the patients will be happy to hear that they are strewn all over. The building has been left to deteriorate for a long period of time and if the department was serious with collecting these files and medicines it should have done that long ago‚” the guard said.

Some of the files are titled “Rehabilitation Progress Reports”. There are tens of boxes with unexpired pills. Some will only expire next year. There are also examination gloves and sterile needles and other medical equipment.

Masumpa Ramolahlei worked at the centre for many years as a caregiver and counsellor. An RNEWS report in May 2017 stated that he was the last volunteer left at the clinic when it was closing.

U.S. citizen who leaked Singapore HIV-cases may have more "files"

U.S citizen who disclosed people's HIV status without their permission could have more files.
News
2 years ago

Ramolahlei told GroundUp that the wellness centre could treat more than three hundred patients per day.

“The real reason for shutting it down was never said. I held several meetings with top officials of the Department of Health in an attempt to persuade them not to close down the facility. My efforts were fruitless. They only said the place was no longer safe for patients.”

He said the discarded files indicate that patients have defaulted on their treatment. “Nurses need your progress report file from the previous clinic‚” he said.

A former patient said that she knew the people whose names were on the files. She said she was angry about that.

She also claimed the the service at the centre had been “professional and friendly”. She said that she was transferred to the Motherwell NU10 clinic‚ but the queues were long and the service poor. It was also expensive for her to travel there. She has since defaulted on her treatment.

Eastern Cape Department of Health spokesperson Lwandile Sicwetsha said the department was informed that there had been break-ins at the disused facility. “Patients were transferred to government clinics. We are busy collecting material including files and medication. We will then return the building to the Department of Public Works to renovate and upgrade it. The process will be completed this week‚” he told GroundUp.