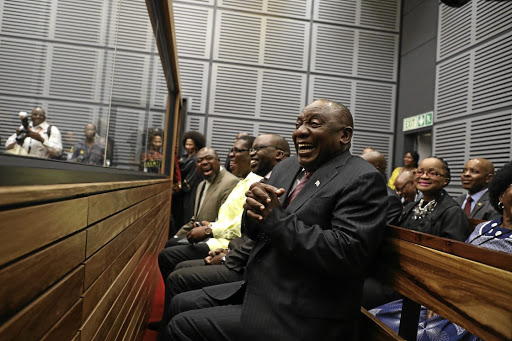 President Cyril Ramaphosa told dozens of women and civil organisations that the government is looking into decriminalising sex work.

He was speaking in Oakdene, Johanneburg, where he signed a gender-based violence declaration and opened a newly-built court building yesterday.

The president told his audience that the government and its partners were working to review existing laws and policies that relate to gender-based violence and femicide to determine if these were still adequate.

"We will finalise the outstanding legislation such as the prevention and combating [of] hate crime, the hate crime bill and victim support services," said the president.

"We will work with all stakeholders to develop policy around the decriminalisation of sex work."

His comments were greeted by loud cheers from women activists and members of nongovernmental organisations against gender-based violence.

He also said there was a need for the government to investigate harmful religious and cultural practices that lead to the exploitation of women and children.

"We commit ourselves in this declaration to commit, to resource, [and to] strengthen the existing gender machinery," said the president, adding that the survivors of gender-based violence need to be treated with fairness, respect, dignity and privacy. "Today begins a new era in our determined struggle to rip our society off gender-based violence and femicide."

The court, which is equipped with a fully-fledged sexual offences wing, will offer a range of services.

It is also fully equipped with children-friendly consulting rooms to support the victims of gender-based violence.