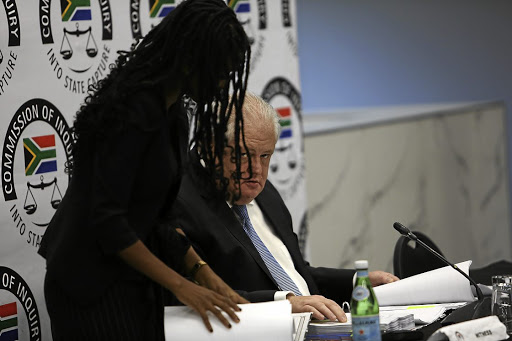 Environmental Affairs minister Nomvula Mokonyane may once again prove herself useful to the controversial Watson family.

After years of allegedly being on Bosasa's payroll, the decision on whether to approve a contested "multibillion-rand" wind farm development in the Eastern Cape lies in her hands. And Bosasa boss Gavin Watson's family would be set to benefit should the development go ahead.

Former Bosasa COO Angelo Agrizzi - now infamous for spilling the beans on the company's alleged illicit dealings with the state in both of his testimonies to the commission of inquiry into state capture - said he constantly questioned why the company kept Mokonyane close, even when it seemed that the relationship was not bearing any fruit. Agrizzi testified at the commission yesterday, after having first appeared in January.

He said he asked himself this question even after he left the company in 2016.
Now, Agrizzi said, he has his answer.

Answering questions before the commission yesterday, Agrizzi said he always thought the reason Bosasa maintained Mokonyane's favour was because of her political influence, which he said was used to freeze criminal proceedings in 2009 after the Special Investigating Unit (SIU) found that the company had bribed state officials to secure lucrative contracts.

Environmental affairs minister Nomvula Mokonyane has expressed willingness to testify  at the state capture commission of inquiry.
News
3 years ago

"The big thing was, for me, the SIU case that we were told was closed . Then I found out that in actual fact it was a little more than that," he told the commission.

Agrizzi said he saw an article on news agency GroundUp last month that referred to the Inyanda-Roodeplaat Wind Energy Facility, which sought to build 47 turbines near the Groendal Nature Reserve, 48km from Port Elizabeth.

Because the wilderness area surrounding the reserve is protected, the project reportedly sparked a backlash among conservationists and tourism organisations, but it was given approval by the department of environmental affairs (DEA) in April last year.

But the DEA's approval is now under appeal, and the adjudication process is in Mokonyane's hands.

Watson's relatives are allegedly among the directors of the company undertaking the project.

"It's a multibillion-rand deal. Everything was done to circumvent the rules of the Environmental Impact Assessment . I saw the article on March 13, which refers to this. I got a call to say, 'now you know why this whole thing is happening'," Agrizzi testified.

Meanwhile, Mokonyane said she is willing to give testimony at the state capture commission of inquiry.

More details about the alleged corrupt relationship between Bosasa and environmental affairs minister Nomvula Mokonyane have emerged at the ...
News
3 years ago

Mokonyane said her decision came after she received notice from the commission on Wednesday that allegations contained in the evidence of Agrizzi implicate her in unlawful, illegal or improper conduct.

"Having now formally received a notice from the commission and the aspects of the statements of Mr Agrizzi that make allegations against me, it is my intention to exercise my rights to testify, cross-examine and call witnesses before the commission.

"This is to ensure that we formally and under oath, dismiss allegations that I have or had a corrupt or unethical relationship with Bosasa or the Watson family as alleged by Mr Agrizzi.

"The allegations are of serious nature, self-contradictory in many respects and are designed to cast aspersions of impropriety against me in my personal and official capacities," she said.