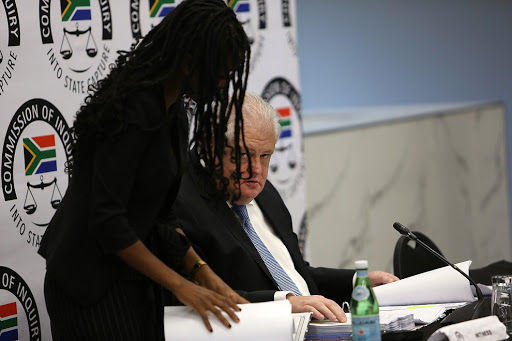 The ANC says it has applied to cross-examine former Bosasa COO Angelo Agrizzi at the state capture inquiry.

Agrizzi‚ who was CEO Gavin Watson’s right-hand man‚ has testified how the controversial facilities company lined the pockets of ANC heavyweights and state officials in exchange for furthering its business interests with the government.

Agrizzi said Bosasa spent between R4m and R6m on bribes a month to help it win lucrative contracts with the government.

Agrizzi reportedly told the commission that Bosasa had donated between R10m and R12m to the ANC's top six leaders.

He also told the inquiry about an alleged war room which was used during elections.

He further testified how Bosasa footed the bill for ANC rallies and birthday celebrations‚ among other things‚ at the insistence of environmental affairs minister Nomvula Mokonyane.

None of those implicated have so far applied to the commission to cross-examine Agrizzi.

Agrizzi’s allegations at the inquiry in January came four months ahead of the May 8 general election‚ which is being touted as one of the most hotly contested since 1994.

The ANC is fighting to increase its majority of the national vote‚ which has been dropping since 2009. It is also fighting to keep control of Gauteng‚ with opposition parties hoping to bring the ANC below 50% in the province.

ANC spokesperson Dakota Legoete said on Friday that a number of allegations had been made by Agrizzi about the party and its leadership‚ and that it had publicly stated that it would‚ in time‚ make a full submission to the commission on all the allegations.

However‚ Agrizzi’s testimony “cannot be left unchallenged”‚ he said.

“We‚ therefore‚ cannot wait for a comprehensive submission to the commission.

“We are confident that the commission will be able to afford the ANC the opportunity to cross-examine Mr Agrizzi on his allegations‚” Legoete said.

Challenge Agrizzi if not guilty

Angelo Agrizzi returned to the Zondo commission of inquiry into state capture yesterday, and as expected, continued to spill the beans.
Opinion
2 years ago

Environmental affairs minister Nomvula Mokonyane has expressed willingness to testify  at the state capture commission of inquiry.
News
2 years ago
Next Article