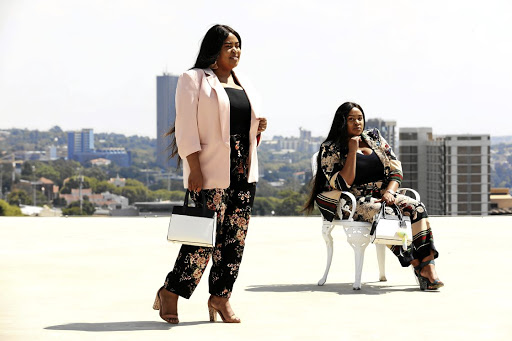 Refilwe and Keneilwe Mmokwa are never apart from each other./ Mduduzi Ndzingi

Identical twins Keneilwe and Refilwe Mmokwa have been inseparable since birth - their close bond now includes being English teachers at the same school.

The two are also pursuing the same Master's degree at the University of Johannesburg. The 28-year-old beauties from Protea Glen in Soweto had heads turning as they arrived at the Sowetan offices in Parktown, Johannesburg, for their interview in bold print pant suits and heels.

"We have always been together... There was never a time where I can say we have been apart," said Keneilwe.

The Mmokwa sisters both studied teaching at the University of Johannesburg and ended up finding employment at the same school, teaching the same subject. They even sleep on the same bed! They are scheduled to graduate with their Honours degrees in education next week, and thereafter pursue their Master's degrees, also at UJ.

"We have always known that we want to be teachers from a young age, from how we played together," said Refilwe.

Keneilwe said although they wanted to study the same course they have always been conscious that their parents could not afford to pay for different textbooks for both of them and accommodation at separate universities.

"It just made sense to study the same degree at the same university," Refilwe added.

"[About] work when we applied for a job we sent CVs to different schools with the hope that just one would get a place," she added.

But Keneilwe was granted a job interview at Silver Oaks Secondary School in Lenasia, south of Johannesburg. She said her sister accompanied her to the interview and they were both eventually hired in 2014 - just months before their graduation ceremony.

"Everyone was very excited that twins will be working at the school," said Keneilwe.

She added that though they think they have similar personalities their students think Refilwe is stricter as a teacher. She indeed appeared to be reserved during the interview, while Keneilwe was more bubbly.

Surgery by doctors at a Gauteng hospital will determine the fate of conjoined twins from Mpumalanga.
News
3 years ago

On the subject of romance, the twins said they had never shared a boyfriend but hope to be in stable relationships and pregnant at the same time.

"We want our children to grow up together and to be close like we are," said Keneilwe. But they said it had been difficult to find men who understand their relationship.

"I've had a boyfriend ask me if I tell my sister everything. I said no, but of course I tell her everything; she probably knows even before I tell her."

Their mother, Keitumetse Mmokwa, confirmed her daughters' closeness: "When they went to school they were separated but one would always go to the other's class. So they ended up putting them in the same class."

Mmokwa said even today they eat from the same plate even when served in different plates at home. Refilwe said they were prepared to live apart if they got married.

"We're very independent and own our space. The bond we have does not depend on us being together all the time."

They said they have an interest in working in education policy one day but also have dreams of being in film and TV.

The secret's out, Lootlove's carrying Hip and Hop

Lootlove and Reason expecting twins.
Shwashwi
3 years ago
Next Article