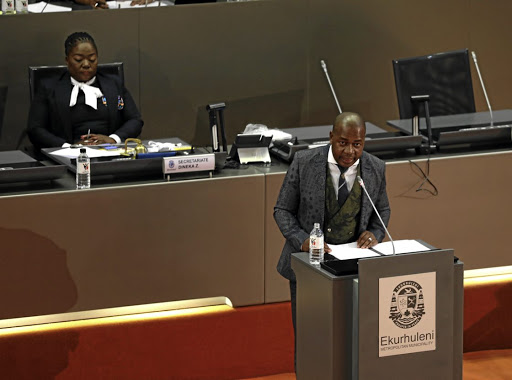 Ekurhuleni mayor Mzwandile Masina during the delivery of his state of the city address in Germiston, yesterday.
Image: MDUDUZI NDZINGI

Ekurhuleni mayor Mzwandile Masina has given himself a pat on the back for increasing the city's capital expenditure (Capex) budget by more than R4bn over the past two years.

Delivering his state of the city address yesterday at the Germiston Council Chambers on the East Rand, Masina said the Capex had been increased from R2.3bn to R6.5bn in order to boost service delivery.

"True to the success of our revenue collection and financial management systems, we have registered profound progress in the period under review. For the last financial year, the city funded its own Capex - a testament to our financial health and credibility."

As if that was enough, Masina commended his administration for obtaining yet another clean audit.

"The city has also received two unqualified audit outcomes with no unauthorised, irregular and fruitless expenditure, and a clean audit on performance information.

The auditor-general gave the city an unqualified audit opinion for the 2017/2018 financial year.

City of Ekurhuleni clamps down on fraud and corruption by officials

Masina stressed that this performance allowed the city to electrify 8,981 homes in informal settlements in the current financial year, totalling the number of connections to 15,590 in two years.

In a bid to address unemployment, the mayor increased the municipal bursary scheme from R10m to R100m. He said he was encouraged by this decision to ensure more young people have access to institutions of higher learning.

Turning to the housing projects in the city, Masina lauded the 26,000 low-cost houses built over the last two years, with a vision that three mega projects will yield 50,571 units by 2021.

"How can the head of the municipality come and not speak of figures because that is what is important? We want to know where did the money go and what did it do. he did not touch on anything, he was just giving us his general feelings and knowledge," said Mojatau.

He accused Masina of failing to give detailed figures because they "don't collate and balance" to what he had planned to do the previous financial year.