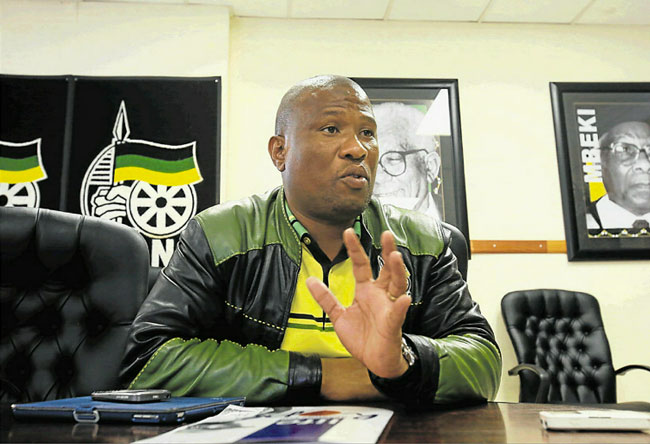 Eastern Cape finance MEC Oscar Mabuyane is taking the heat from students after a video of his maiden budget speech surfaced on social media showing Mabuyane telling the legislature that students in East London drank more than R1m of their NSFAS money in a single weekend.

Students studying on funds from the scheme get a monthly allowance of R1,400 for food and a once-off R5,500 book allowance deposited into their bank accounts.

In the video shared on social media by students, Mabuyane says in a disapproving tone: “Students in East London received their NSFAS cash allowance on a Thursday and by Sunday, a certain liquor outlet had made R1m from the students.”

Mugabe said this statement was baseless. “It’s unfair to evaluate students based on insinuations. There is absolutely no way to prove that money was made from students alone because cash is cash.

“In fact, politicians spend more money on alcohol. I know a politician who blows R40,000 a night on booze at a champagne bar in Beacon Bay.”

Responding on Friday, Mabuyane said it was an open secret that students abused NSFAS money and alcohol.

He said: “There is blatant and serious alcohol abuse at our tertiary institutions. It is a societal problem.

“We have partnered with SAUS on an awareness programme that will help students. We have invested R6m on an anti-alcohol campaign.”

Mabuyane said he had received the R1m figure from a student affairs official at one of the two universities. “Government must regulate the usage of the NSFAS money,” he said.

UFH SRC deputy president Sonwabiso Mamkeli said: “I don’t know where he got the information from. There is no causal nexus to his findings.

“Considering students get cash in their bank accounts, how did he determine that a million came from students because the students don’t use student cards when purchasing but cash, just like all members of the public.”

NSFAS 'alarmed' after Mpumalanga students kicked out of residences

The National Student Financial Aid Scheme (NSFAS) on Wednesday said it was "concerned and alarmed" that students had been left to find accommodation ...
News
2 years ago

“Instead of complaining and accusing young people, let’s empower them.”

Mugabe confirmed that SAUS had fought for students to be given cash instead of vouchers so they could spend on other basic needs including medicine and clothes.

ANC ward councillor in Southernwood, Pindile Miza, said concerns had been raised with his office in his Ward 3 over wild parties organised by students from the Walter Sisulu and Fort Hare universities, Unisa and Buffalo City campus.

Tukwayo said the students received their allowances for books and food in their bank accounts.

Tukwayo said the university had received complaints from residents neighbouring student accommodation in the Southernwood suburb regarding rowdy behaviour which coincided with payment dates of NSFAS allowances. “There are those rowdy students but certainly it’s not all of them that behave this way – you can understand they are still young, they need guidance as well even on how to handle money.”

Tukwayo said in some cases involving funding backlogs, a student could get up to R10,000 in cash in one month.

“You can imagine that to a student that is a lot and complaints from residences about student behaviour always coincide with the NSFAS cash payments.”

Tukwayo said the university offered support counselling and if it failed, disciplinary measures kicked in.

Fort Hare spokesperson Kgotso Moabi could not comment as load-shedding had left its computers down.

The Mpumalanga police had to open doors for students of the Mapulaneng TVET college to sleep at the institution's premises after they were chased ...
News
2 years ago
Next Article