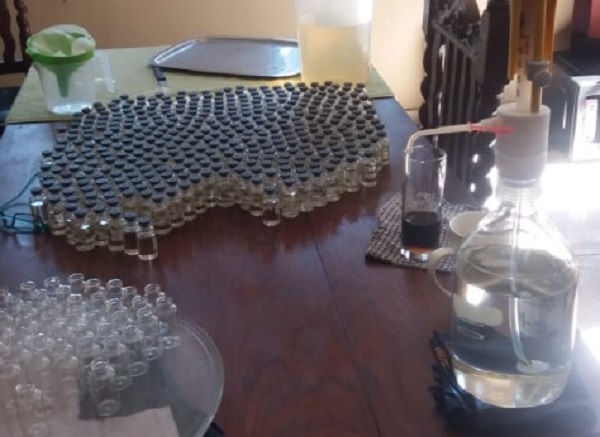 National police commissioner General Khehla John Sitole on Thursday praised his detectives for sniffing out a clandestine laboratory‚ leading to the arrest of three people on charges related to manufacturing and distributing a schedule 6 drug.

Pretoria police raided a farmhouse in the Vasfontein area of Hammanskraal just outside the capital city on Wednesday.

"An array of steroids in the form of tablets for oral intake and liquid intended to be consumed intravenously was being manufactured on this farm‚" police said in a statement.

A 55-year-old qualified pharmacist‚ his 52-year-old life partner and a 38-year-old employee were arrested on the scene.

The team confiscated large amounts of finished products as well as chemicals‚ machines including a tablet presser‚ a mixer‚ a tablet-coating machine (for colouring of tablets)‚ two pistols‚ of which one is unlicensed‚ and a loaded shotgun along with several rounds of ammunition.

Police said in a statement: "The conditions under which the steroids were being manufactured was uncontrolled‚ unconducive and could potentially‚ if not already‚ be a health risk to those in the area of the operation as well as those consuming the products."

A fourth suspect is in the detectives' sights.

"It became evident from documents seized on the premises that one of the persons to whom these drugs were being supplied was arrested in 2015 and in 2017 he was convicted and sentenced to 15 years' imprisonment plus a fine of R900‚000‚ of which the 15 years was suspended for five years. Police are currently searching for this individual."

The national police commissioner‚ speaking from the crime scene on Thursday morning‚ said: "It goes directly against government's initiatives for rural developments when a property intended for farming is used to produce illicit substances."

This seems to be a growing modus operandi after police also detected a similar multi-million rand mandrax laboratory in Harding a few months ago.

The three people arrested near Pretoria are in police custody for now‚ while investigations proceed.

They may be left poorer‚ following the police raid.

General Sitole said: "I have tasked the investigation team to engage the Asset Forfeiture Unit in an effort to seize all property to the state in terms of the Proceeds of Crime Act (POCA)."