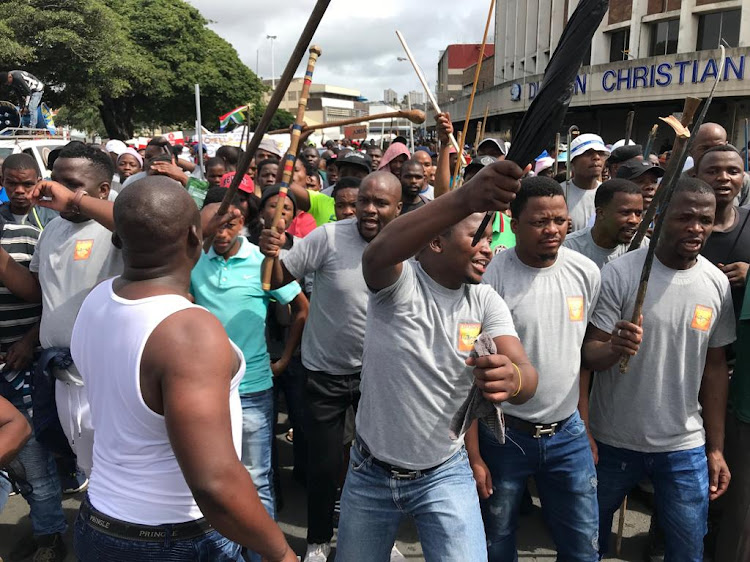 Two Durban-based human rights organisations have slammed the ruling ANC party for having failed South Africans, 25 years after the birth of democracy.

Their sentiments were expressed during a peaceful Human Rights Day protest in Durban's central business district where several hundred people embarked on a solidarity march on Thursday from the King Dinizulu Park to City Hall.

The deputy president of Abahlali baseMjondolo (Shack Dwellers) Movement, George Bonono, said it was an important protest to be involved in given the plight of many South Africans.

"The government, especially the ruling party, has failed its people. They have failed the people in these 25 years after being given the chance to lead this county. People's rights are being violated on a daily basis. If you go to the hostels, people have been stuck there in a one-bedroom shack with no water and no electricity.

"Where are the human rights for them? That's why we have gathered here today in unison to show not only the government, but Africa and even the likes of the United Nations, that there is a serious problem in this country."

The operation, which was aimed at protecting consumer rights, consisted of a business compliance inspection blitz at various identified hot spots in and around Durban.

Magwaza said the rights of local traders had been violated during this blitz.

"If somebody is selling goods to make a living and you harass those people on the basis that they don't have a permit, yet you are the ones responsible for the issuing of those permits and you don't do it, that is a violation of human rights. That is why we are here, to fight for street traders whom the government have seemed to have failed."

Local resident Price Allagan, 61, also weighed in on the conversation.

"If one just looks at what is happening in the country, they would understand why this kind of protest is needed. Look at the corruption within Eskom - the ruling party have failed us.  To be quite honest, human rights is just a term - people say they are doing something but they are in fact doing nothing.

"We don't expect government to provide handouts to people but stop giving work to your cadres - all the corruption has cost this county billions, imagine how much poverty could have been alleviated if there wasn't so much corruption. But you know the saying: the rich get richer and the poor get poorer," he said.