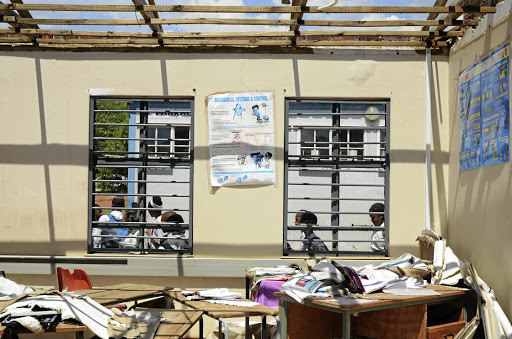 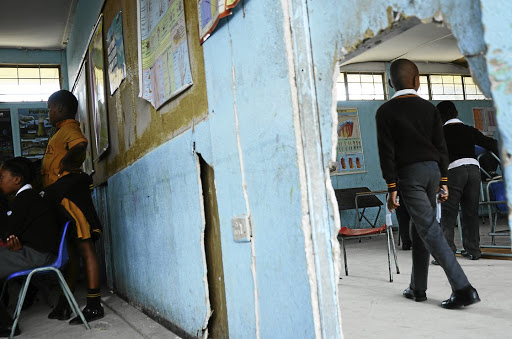 The Gauteng department of education has just over R1bn allocated for the renovation and rehabilitation of public schools while it needs five times more.

The budget allocated for planned and unplanned renovations amounted to only R871m and R200m respectively while faced with aging and deteriorating school infrastructure that need about R5bn in maintenance.

Four pupils died after a bridge fell on them at Hoërskool Driehoek in Vanderbijlpark, in the Vaal area, in January. The school which was built more than 50 years ago, had crumbling infrastructure that needed urgent attention.

At Kwadedangendlale Secondary in Zola North, Soweto, there are bricks falling off the walls, while walls at Ditau Primary have holes; the ceiling has collapsed and some doors are missing.

At Oakdale Secondary in Ennerdale, four classes don't have a roof after it was ripped off by the storm. At Eqinisweni Secondary in Tembisa, on the East Rand, pupils are taught in temporary classrooms made of corrugated iron sheets without windows, doors and chalkboards.

A fourth pupil has died in hospital following the walkway bridge collapse incident at the Hoerskool Driehoek.
News
2 years ago

Lesufi said the first infrastructure audit was conducted by the department of basic education in 2008.

This was followed up by an update of 1,200 schools in 2013 and a further update of another 750 schools by the Gauteng department of infrastructure development.

"It must be noted that audits of schools' infrastructure are also conducted when specific reports/complaints are received from schools on an on-going basis as part of the updating of the national education infrastructure management system," Lesufi said.

When asked about what was the projected time frame to fix the schools facing infrastructural defects, Lesufi said in terms of the current planning which was based on indicative budgets at this stage, it was envisaged that all schools' renovations/rehabilitation will be fully completed by the year 2025.

Ramulifho said many of the province's schools were ageing and the infrastructure was deteriorating because the schools were 60-years-old and have not had proper maintenance for a long time.

"The buildings are old and were not designed to accommodate [the number of] pupils [they do now]," Ramulifho said.

Ramulifho said so far there were 80 schools that needed serious renovations or rehabilitation but the number could be bigger, depending on auditing.

WATCH | Hoërskool Driehoek girl on how she witnessed walkway collapse

One of the eye witnesses to the deadly collapse of a walkway at Hoërskool Driehoek, Trimone Ragebult, said she could no longer sleep after seeing the ...
News
2 years ago

'I will cry for many years': father of Hoërskool Driehoek pupil

It was a cloudy morning on Tuesday at Hoërskool Driehoek in Vanderbijlpark‚ which was rocked by tragedy last week.
News
2 years ago
Next Article