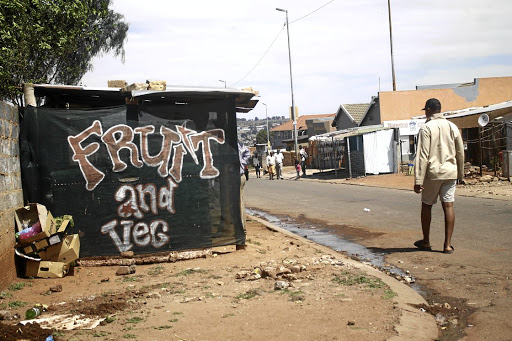 Calm has returned to Munsieville, Krugersdorp, after a mob invaded Dr Yusuf Dadoo Hospital yesterday to attack a suspect in a stabbing incident at local bar.
Image: KABELO MOKOENA

A Munsieville man was dragged out of a casualty ward and beaten to a pulp outside Krugersdorp's Dr Yusuf Dadoo Hospital by a mob who accused him of murder.

The man, who may not be named because he is under investigation for murder and attempted murder, was first attacked in the community before an ambulance arrived and rushed him to the hospital yesterday.

A group of about 50 men allegedly followed the ambulance to the hospital in town and stormed the casualty ward in search of the injured man.

Hospital CEO Dr Patrick Sofohlo said the patient was waiting to be attended to when the group ambushed him.

"When the patient saw the group, he ran into the medicine room. But the group broke down the door, dragged him out and assaulted him," Sofohlo said.

The mob apparently used axes, crow bars and other tools to break down the door before dragging him outside.

Striking health workers at a Gauteng hospital have been warned to return work or face dismissal.
News
3 years ago

"He was transferred to another hospital where he is getting treatment under police guard," Sofohlo said.

Tshepo Mulaudzi, a Munsieville resident, said the injured patient was hunted down by the group because
he allegedly murdered a man in the community over a
woman.

"That guy got into a fight because of a girl. His girlfriend was apparently wearing another guy's jersey at the tavern, so he confronted him and that's when they fought.

"He took out a knife and stabbed him," Mulaudzi said.

Another resident who asked not to be named said the man was then attacked by a mob in the area.

"The guys who were assaulting him said they would not allow him to live because he killed their friend.

"They took three combis and went to the hospital where they found him and assaulted him," the resident said.

Police spokesman Colonel Lungelo Dlamini said charges of murder and attempted murder against the injured man were being investigated.

"Police are investigating a case of malicious damage to property and assault after community members assaulted a patient," Dlamini said.

Operations at a Gauteng hospital were completely halted yesterday after health workers downed tools demanding a canteen, among others.
News
3 years ago

A family wants answers after their mother allegedly suffered severe neglect and a cancer misdiagnosis at a public hospital before she died.
News
3 years ago
Next Article