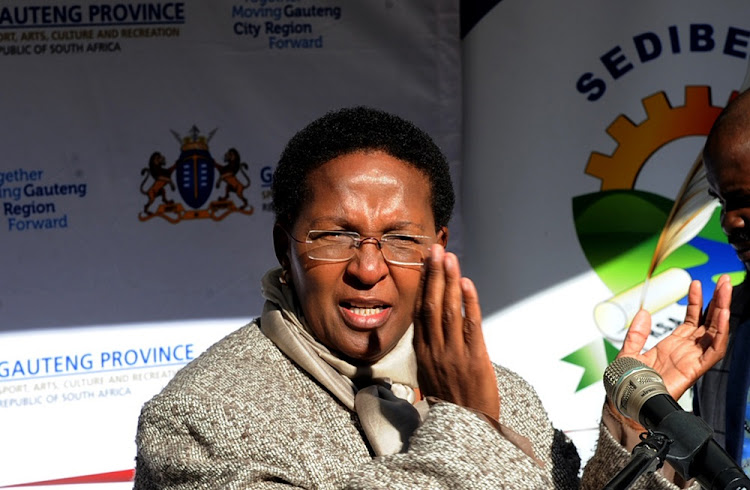 Gauteng sport, arts and culture MEC Faith Mazibuko has apologised for her rant to senior management in her department after an audio with racist remarks shocked the country.

In an official apology released by her department, Mazibuko said she regrets her conduct.

“I, Faith Mazibuko, member of the executive [MEC] responsible for sport, arts, culture and recreation in Gauteng profusely apologise to the people of Gauteng as a result of the widely circulated audio recording of myself concerning a meeting I held with senior managers on February 15, 2019.

"After deep personal reflections, I want to unreservedly apologise for the tone and improper language I used towards my head of department and chief financial officer. I humble myself and apologise to premier [David] Makhura and my colleagues in the provincial cabinet for the harm caused. I am willing to subject myself to whatever appropriate sanction to be imposed on me by premier Makhura and my organisation, the ANC,” said Mazibuko.

In the audio recorded during a management meeting, Mazibuko can be heard screaming and telling her staff to expedite a "combi courts" project - facilities that can accommodate various sports - which she wants completed in "this financial year".

She is heard saying the "combi courts" must be used for ANC's election campaign.

"... that combi court, we want to use it to campaign to win elections."

A member of her staff tries to tell her that they cannot find a "legal mechanism" and that "there is not a valid contract in place" to roll out the project but Mazibuko did not have any of that.

... that combi court, we want to use it to campaign to win elections

She also tells the staff that her office is the only one with a white head of department and an Indian financial officer.

“It is so unfortunate. We are in the process of the premier speaking to her so that we can find a solution that can be acceptable. It does not represent the stance of government on how to treat public servants or senior managers of government. We really believe it is regrettable. We are quite convinced that before the end of business today, the premier will be in a position to resolve it,” said Lesufi.

The DA in Gauteng has asked IEC to investigate sports MEC Faith Mazibuko for possible abuse of public money for party political purposes.
News
2 years ago
Next Article