Pastor on three-day protest against false prophets: 'People are in danger' 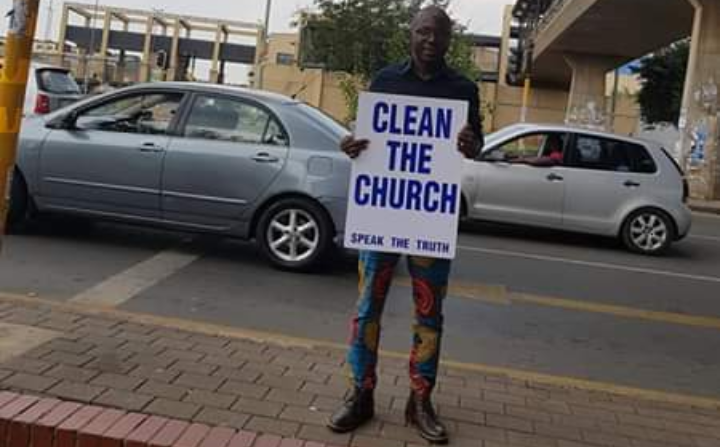 Solomon Izang Ashoms, who is the founder of Movement Against Abuse in Churches, says although people still fall victim to abuse in churches, some have only just realised the danger of false prophets and pastors.

Ashoms completed his three-day one-man protest on Friday. It was intended to raise awareness of individuals who continually get away with bringing churches to disrepute.

Ashoms has been an ordained pastor for ten years, but he does not lead any congregation as he believes his calling is activism: to speak up against those who purport to be pastors and prophets, when all they do is subject believers to abuse.

Pretoria, Sandton and Soweto are the three places in which Ashoms protested, holding a placard stating "Clean the church" while he handed out pamphlets to passersby and offered some teachings.

On why he chose these specific areas to protest, he said "I looked at the demographics. It is in these places where you find the most people who go to these churches, led by false prophets. In Soweto I was in Chris Hani Road, right next to Baragwanath hospital."

"Here, people are suffering and they need hope, which is exactly how they end up falling victim to these false pastors and prophets."

"I have been teaching about this for the past ten years. I've endured threats and insults, yet today, people now come up to me and say they realise how they have been abused."

There is a specific reason why Ashoms protested for three days. He said it was symbolic of the death of Jesus Christ who died and rose on the third day, which is the same stunt used by Alleluia Ministries pastor Alph Lukau and the man "he rose from death", Brighton Moyo, who was initially introduced as Elliot.

"Lukau was replicating Jesus with his 'miracle' as Elliot 'died' on Friday and 'rose' on the third day, which was Sunday."

Ashoms said although people have asked to join him in the protest, he insisted he would do it alone to teach people that even as individuals, people can make a difference.

A man who calls himself a Christian apologist will embark on a one-man three-day protest over fake prophets.
News
3 years ago
Next Article