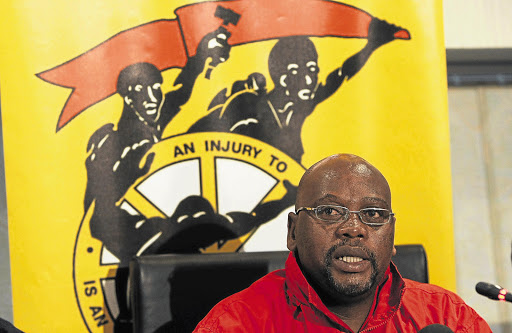 S’dumo Dlamini to seek 3rd term as head of COSATU

This was the headline of the story on the Sowetan in the article by the journalist Neo Goba dated 13 September 2018 just three days before the last COSATU National Congress.

I opted not to challenge the article at the first time I saw it safe to mention that I registered a complaint with management of the newspaper at the time and clearly they never saw it fit to correct the malicious and the factional angling by the newspaper in the contestations within COSATU leading to the National Congress.

Besides mentioning that the journalist never even bothered to solicit my opinion to at least support the lies he wanted peddle. I have since followed up this matter with the management of Sowetan again and do appreciate the hearing I was given to express my displeasure about the article which sought to present myself as a power monger and an unreliable leader who had declared he was not going to make himself available for re-election at the last Congress but then changed purely because it was a nice thing to do.

I won’t bother the public on why he was doing this and who were working with him in our political space. I simply want to expose the lies and his failure to do proper research before writing the story. Secondly I want to place it on record that in my entire trade union movement over a period of 28 years I had never contested a position safe for once in 2000 when I was elected Provincial Chairperson of COSATU in KZN.

I had already served three terms in that office and another term as 1st Deputy President and Acting President. This is the lie he wrote about in the article pushing the point home that I am a power monger and wanted to cling to the position at all cost.

Having spent 18 years in Central Executive Committee in the different capacities as mentioned above a leader comes to a point of self reflection about what new contributions he can still make and what new ideas could still be innovated.

But more fundamentally when do you begin to accept that there is a need for new ideas with new and much younger leaders. Against all other smears and slander that I was painted with on the eve of the Congress by individuals from their dark corners the above are my reasons why I had told comrades that I was not going to be available at the Congress in September 2018.

I had raised this matter many times from 2015 , 2016 , 2017 and 2018. Actually in 2018 I put it to the Central Executive Committee. There was no way on earth I could have changed my mind about the matter I had opened up about it up to constitutional structure of the federation including other alliance organizations the ANC and the SACP I had done my bit of the contribution to the workers of this country. Inclusive of some mistakes committed in the course.

This journalist was aware of this from those he worked with but deliberately distorted facts to suit a particular agenda. I gave them a chance to correct this but that was never done. I am not a journalist but I still know the basic rule of fairness that you must listen to the other side too.

This I was denied and he skillfully gave some impression that he spoke to me and that is not true. Mostly all other journalists at the time will know that in respect of the federation I had always sought not to discuss issues of leadership with the media as that is always the preserve and prerogative of the affiliates of COSATU.

The article exploited this noble rule which always helps to enhance the unity of the organization. I believe that will well put the matter to rest if there ever any doubt within and outside the federation I served well my time as a workers leader in the country and moved on gracefully and will always respect the workers of this country. I never had any ambition to stay on.

I am serving the people of this country in a different capacity now and one day at the correct time will make it known officially.

I agreed with the leadership of the newspaper I will set the record straight in this short letter to the editor for publication and did not want to go to the Ombudsman as I have no intention to pick any fight with the newspaper.

This article is written in personal capacity and as former PRESIDENT of COSATU my name is S’dumo Dlamini.

Sowetan has noted Mr Dlamini's objections to the article, we are however satisfied that Goba did in fact call and have an interview with Dlamini.

Below is the audio recording of the conversation between the two parties.