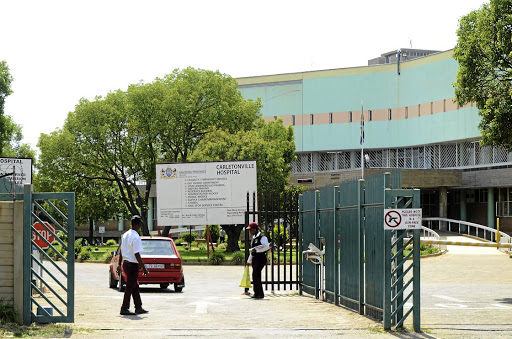 An explanation by Carletonville Hospital on the West Rand has left two families searching for the real cause around how their loved ones died. The families have rejected the hospital's claim that the patients fell from their beds./ Mduduzi Ndzingi

Two families are demanding answers from the health department after their loved ones died under mysterious circumstances at a Gauteng hospital.

Elizabeth Tsaagane, 55, and Joyce Mogapi, 62, both died after allegedly falling from their beds at Carletonville Hospital on the West Rand on two separate occasions.

Tsaagane's family opened a case with the police after she died.

According to the family, Tsaagane was admitted on February 4 after complaining of leg pains and constipation.

"That hospital has hurt this family. We don't believe that she fell from her bed.

"It's either she was assaulted or something else happened to her," Makau said.

He said they wanted justice for their mother.

"She was a good woman and we loved her," he said.

A death certificate that Sowetan has seen states she died from unnatural causes.

Respiratory problems and extremely low birth weight are among the reasons behind the deaths of eight babies.
News
3 years ago

Eight babies have died in one month at a Gauteng hospital ward in what nurses fear could be another deadly outbreak.
News
3 years ago

Tsaagane's daughter Mosidi Makau said: "I was shocked to get a phone call from nurses saying that my mother would be transferred to Leratong Hospital.

"They said she fell from the bed but failed to explain how this happened."

Mosidi said upon arrival at Leratong, her mother was classified as unknown patient because she was taken there without her medical records.

She said Tsaagane was then taken from Leratong to Chris Hani Baragwanath Academic Hospital where doctors confirmed that she sustained head injuries and was bleeding internally.

"Sadly mama did not make it," Mosidi said. Mogapi's daughter Patricia Maimane approached lawyers after her mother died under similar circumstances in January last year at the same facility.

Maimane suspected that her mother was hit with an object on the head despite claims from hospital staff that she fell from her bed.

Sowetan has seen e-mails that show Maimane lodged a formal complaint with the hospital about two weeks after her mother died.

"On Monday morning, my little sister got a call that mom fell from the bed.

"But when she got to the hospital, she already saw a dead person who nurses were trying to save knowing very well she was no longer alive," Maimane said.

She also raised questions about the competence of staff.

"We are traumatised by the scene we saw as her children. We just want closure and want to know the way forward.

"She was the breadwinner. My siblings are still in school," Maimane said.

"According to the labour relations officer's findings, the patient fell from a closed cot bed," Moloi said.

She said the family decided to take the matter further with the provincial department through their lawyers after a redress meeting with hospital management.

"On February 11 around 23h30 while busy with nursing duties, nurses were alerted by the screams of patients in the ward.

"They rushed to the ward and found Elizabeth Tsaagane on the floor," Moloi said.

She said the hospital did its best to care for patients and had not received similar complaints.

"In as much as we strive to offer our community quality health care on daily basis, it is unfortunate that these type of incidents occurred.

"We'll ensure we finalise the investigation in Tsaagane's case and approach her family for a redress meeting to give them all information regarding their loved one," Moloi said.