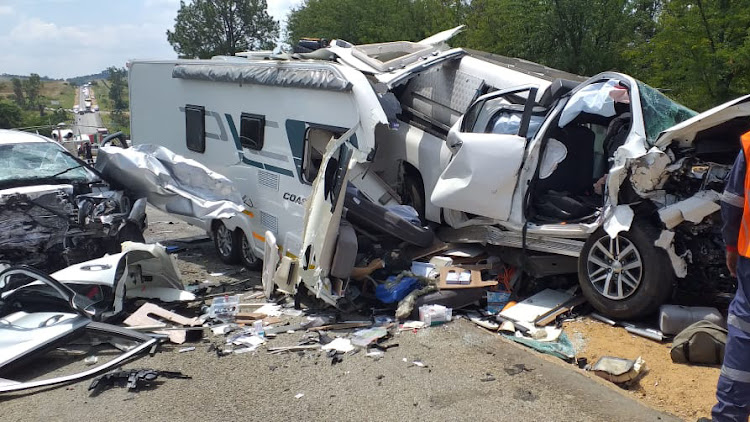 A head-on collision on the R512 in Lanseria between two vehicles - one towing a caravan - on Sunday left two people dead and three others seriously injured.
Image: ER24

Traffic was backed up on a popular route between Johannesburg and Magaliesburg on Sunday as a result of a fatal crash.

ER24 said two people were killed and three others sustained multiple injuries in the head-on collision on the R512 in Lanseria, north of Johannesburg.

"Shortly after 11am, paramedics from ER24 and other services arrived on the scene where they found two vehicles with severe damage," said the paramedic service's Werner Vermaak.

"One of the vehicles was towing a caravan at the time of the collision ... Paramedics found two occupants, one from each vehicle, showing no signs of life. Despite all their efforts, the paramedics were unable to regain any vital signs and they were declared dead on the scene.

"Three other occupants had to be freed by the fire department from the wreckage. One was airlifted to hospital by a medical helicopter while the other two were rushed by ambulance to hospital. All three sustained serious injuries."

Vermaak said the exact circumstances surrounding the collision were not yet known.

"Local authorities attended the scene and will conduct an investigation."