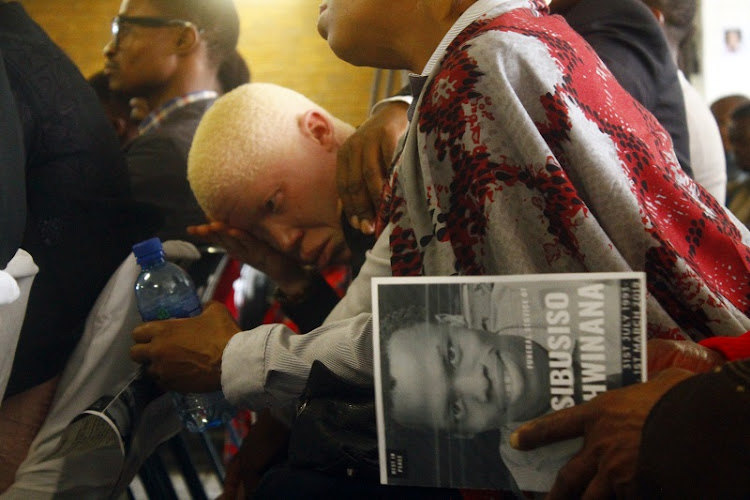 A distraught Tebatso Mashishi, Sibusiso Khwinana's Matwetwe costar, who was also with Khwinana when he was stabbed to death sits among other mourners at Khwinana's funeral on Saturday.
Image: Kabelo Mokoena

The funeral service was held at AFM Hilltop Restoration Centre in Soshanguve, Tshwane before the 25-year old's remains were interred at the Zandfontein Cemetery.

Khwinana was stabbed and killed by muggers who were robbing him of his cellphone outside Sterland Cinema in Pretoria after the screening of the box-office hit Matwetwe last week Friday.

Family representative John Malinda said they had hoped that the fallen actor would take his family to greater places as he was the first in the family to get on a Gautrain.

“I was shattered when they called at 2am asking me to wake up. I was told that Sibusiso had been killed. I immediately woke up and swore that I was going to kill them (the attackers),” he said.

The teary uncle, who had a blue face towel in his hand to wipe tears that were flowing down his face, said he had earlier received good news from her sister that Khwinana was about to go to China.

Unfortunately, his life was cut short before the tour.

Makhura also paid tribute to Khwinana and pleaded with the Matwetwe co-producers Kagiso Lediga and Nkosinathi ‘Black Coffee’ Maphumulo to seek more raw talent and expose it to the nation.

“Today is a sad day, even though we believers believe that the bible calms us down, this is still a sad day.

“You (Matwetwe producers) needed Sibusiso to bring the greatness of Matwetwe out,” said Makhura.

Lediga said he has been receiving global condolences but would rather pass them on to the family of the deceased.

“It's crazy that a person can do so much in such a short space of time,” he said.