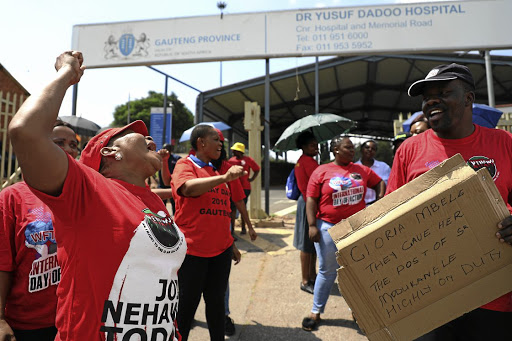 Striking health workers at a Gauteng hospital have been warned to return work or face dismissal.

This after the provincial health department on Thursday obtained a Labour Court order declaring protest action by doctors, nurses and other staff members at the Dr Yusuf Dadoo Hospital in Krugersdorp, on the West Rand, illegal.

Workers at the hospital downed tools on Monday amid demands for better working conditions and the reopening of the facility's canteen.

HOD at the provincial department of health Dr Mkhululi Lukhele said they were forced to approach the courts because the strike had resulted in disruption of services including the closure of the pharmacy and outpatient department while surgeries had to be postponed.

“The department has given the striking employees an ultimatum to go back to their work stations with immediate effect, of which failure to heed the call will result in summary dismissal. In the meantime, the hospital is effecting the principle of no work no pay,” Lukhele said.

Operations at a Gauteng hospital were completely halted yesterday after health workers downed tools demanding a canteen, among others.
News
3 years ago

He said although the department respected the right of workers to strike, they could not allow unlawful protests to continue.

The Labour Court order comes after the department obtained an interdict in the South Gauteng High Court in Johannesburg on Tuesday preventing workers from intimidating hospital management and causing disruptions.

“As a department we were left with no option but to approach the courts to interdict the strikers and restore service to the facility,” Lukhele said.

Sowetan previously reported that the hospital came to a standstill as workers complained about poor management, failure to reopen the canteen in two months and shortage of medical resources.

A family wants answers after their mother allegedly suffered severe neglect and a cancer misdiagnosis at a public hospital before she died.
News
3 years ago

Gwen Ramokgopa says she is outraged at the allegations of sexual assault at the Dr Yusuf Dadoo Hospital.
News
4 years ago
Next Article