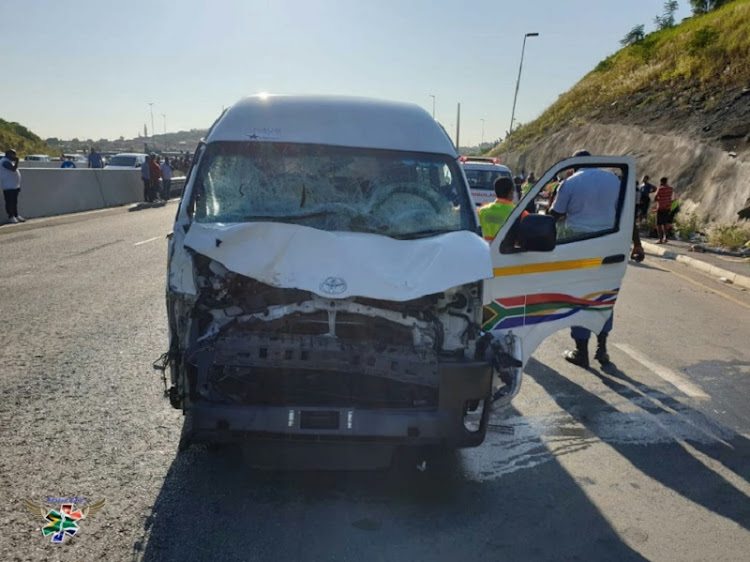 Siboniso Bethell Zwane, the driver of a taxi that ploughed into a group of girls walking to school, killing three, told the Ntuzuma Magistrate's Court that he did not want his photograph published as he feared for his life.
Image: Rescue Care

The driver of a taxi that killed three schoolgirls in Newlands East‚ Durban‚ on Wednesday fears that the community is baying for his blood.

Through his legal aid attorney‚ 32-year-old Siboniso Bethell Zwane informed the Ntuzuma Magistrate's Court that he did not want his photograph published as he feared for his life.

"It is my instruction that he does not want his photograph published as he fears that his life will be in danger‚ taking into account the type of the offence that has happened and how people reacted. His life‚ the lives of his children and his family will be in jeopardy if his photo is published‚" attorney Siphokuhle Thusi said.

Zwane's address was also not read into the record for "safety reasons".

He handed himself over to police on Wednesday after fleeing the bloodied scene where the bodies of the three girls lay on a main road in Newlands East. He abandoned the vehicle at the scene.

Three school girls have died and one is fighting for her life after a taxi collided with them as they were walking to school on Wednesday morning.
News
2 years ago

After the accident‚ angry community members blockaded Dumisani Makhaye Road‚ where the accident had occurred‚ demanding the identity of the driver from passing taxis.

They later burnt tyres on the road.

Dressed in blue shorts‚ a blue-and-white striped golf-shirt and sandals‚ Zwane stood with folded arms in the dock during his first court appearance on Thursday.

Prosecutor Seema Reddy said it was alleged that on March 6‚ Zwane was driving a taxi that had "collided with several young children resulting in the deaths of three girls".

"Another child is in a critical condition‚" she said.

The charge sheet identified the victims as Ayanda Mtshali‚ Thima Ngiba‚ both 14‚ and 13-year-old Luyanda Ngubane.

Zwane is expected to apply for bail on March 13.