'We are not victims but survivors' - Babes Wodumo 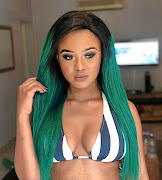 Assault victim and gqom artist Babes Wodumo has broken her silence by reflecting on the brutal murder of her friend Karabo Mokoena by her boyfriend at the time.

This is the first time Babes has posted on social media since video footage of her being slapped several times‚ by Mampintsha‚ went viral. Babes has laid charges of assault against Mampintsha‚ who was released on R2‚000 bail on Tuesday.

The Wololo hitmaker shared a snap of herself and the late Karabo in a friendly embrace on Instagram.

"In 2017 I lost a friend because of abuse‚ I could have been next #I'mwalkingaway.

On Tuesday‚ Simelane family spokesperson Sakhile Mhlonishwa Langa told TshisaLIVE that she was "emotional" and was receiving treatment at home.

Speaking to journalists outside court on Tuesday‚ Mampintsha admitted to hitting Babes and alleged that she also beat him.

Several attempts to get comment from the Simelane family on Mampintsha's allegations against Babes went unanswered.