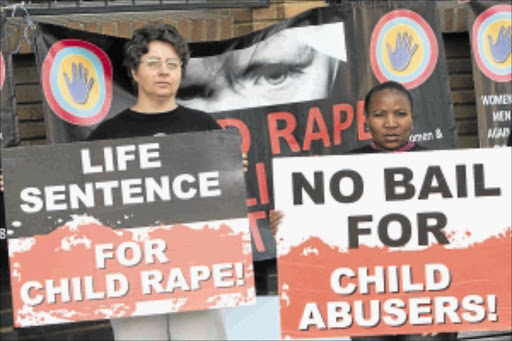 AT RISK: In this file picture members of Women and Men Against Child Abuse protest outside court. A new study on child murders shows that the country's child protection policies have little effect.
Image: ANTONIO MUCHAVE

Women and Men Against Child Abuse (WMACA) has warned parents to be careful of people who give their children more attention than they do.

"If someone gives your child more attention than you do, you have a problem," said the organisation's Luke Lamprecht at a media briefing in Johannesburg yesterday, amid allegations that a Bryanston High School sports coach had sexually assaulted a pupil and harassed two others.

"Grooming is a process by which an adult in a position of trust or authority takes a child or two and make them their favourite; somebody who says, 'you are going to be the next running star', and then pays special attention to that child," Lamprecht explained.

"When you see somebody taking a special interest in your child by isolating them, that's when you need to intervene because that's when the danger starts. In addition, sex pests engage in boundary violations, for example ... watching pornography," he said.

Lamprecht said once the boundary has been violated, it is hard for the children to go to their parents and report what has happened because they fear they might be in trouble.

The Bryanston coach was found guilty after a disciplinary process at the school.

He is expected to appear in court on Tuesday next week in connection with a complaint laid by one of the three learners he is alleged to have sexually harassed.

"Parents who decided to take the disciplinary process over the criminal process did so because they believed they would be rid of this teacher forever and that he will never work with children again," said Miranda Jordan, the director of WMACA.