Duo killed at their homes over phones 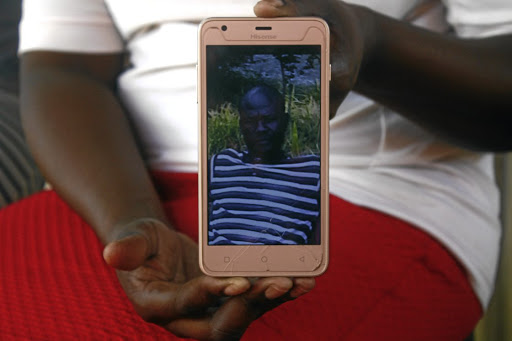 Moeketsi Ngele's wife holds a phone with the picture of her murdered husband. / KABELO MOKOENA

The wife of the man who was killed while trying to rescue his tenant has told of moments before he was gunned down.

Moeketsi Ngele, 39, was shot in the early hours on Sunday at his home at Winnie Mandela Zone 12 in Tembisa.

The 33-year-old woman, who did not want to be named, told Sowetan both her husband and tenant were shot dead almost at the same time.

"I am speechless, I feel paralysed after losing him in this way," she said.

"He went to work as usual that day and came back not knowing he was returning to his death." She said she was inside the house with her husband when they suddenly heard gun shots.

"My husband went out to see what was happening. After he left, another shot went off and I ran to check if he was fine. I found him laying on the ground."

Pride of Soshanguve dies after he was stabbed during robbery for his cellphone.
News
3 years ago

The father of two was his family's breadwinner.

A tenant who witnessed the robbery said the thugs came and demanded cellphones and computers.

"They started at the shack near the gate, where they demanded money and cellphones before brutally killing a mother in front of her kids," said the witness.

"What is more heartbreaking is that they took the lives of innocent people for mere cellphones as they did not take anything else."

The Ngele family is currently making preparations for his burial in Burgersfort, Limpopo, at the weekend.

Police spokesperson Jacob Mashile said a couple at another house, about 500m from the Ngeles, were attacked in the same manner - leaving them fighting for their lives.

"Two cases of murder, two of attempted murder and two of robbery and break-in have been opened," said Mashile.

He said police launched a manhunt for the suspects and pleaded with anyone with information that could lead to their arrest to contact the Tembisa police. Mashile said the suspects took away seven cellphones from both houses and R1,000 in cash.