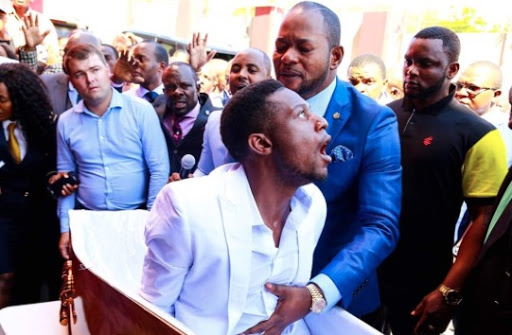 A man who calls himself a Christian apologist will embark on a one-man three-day protest over fake prophets.

The protest‚ according to Solomon Ashoms‚ comes after recent reports of a man who was allegedly brought back to life by Alleluia Ministries' pastor and prophet Alph Lukau.

Lukau has since denied claiming to have resurrected a man.

"I decided to do it [protest] alone because Jesus went to the cross alone. I am also doing it over three days because Jesus died and rose on the third day‚" said Ashoms.

He said the main reason for the protest was to challenge fellow Christians to speak out against fake prophets.

"I just want to challenge individuals that you alone can do so much. I'm throwing a challenge out there to say people must speak out about fake prophets."

Pastor Alph Lukau has broken his silence following criticism of the supposed resurrection of a dead man.
News
3 years ago

During his one-man protest‚ Ashoms says he will be handing out flyers and a book he has written‚ titled Prophets for Sale.

He is also be carrying two placards. One reads "No false miracles" and the other one reads "Clean the church".

Ashoms runs an organisation called Movement Against Abuse‚ which helps victims of abuse in churches.

"I try to defend what I feel is biblical. I defend my faith. I am a Christian apologist."

The three-day protest will start in Pretoria at the corner of Church and Du Toit streets on Wednesday.

On Thursday‚ Ashoms will be in Sandton at the corner of Grayston Drive and Rivonia roads. He will be in Soweto on Friday at Chris Hani Road.