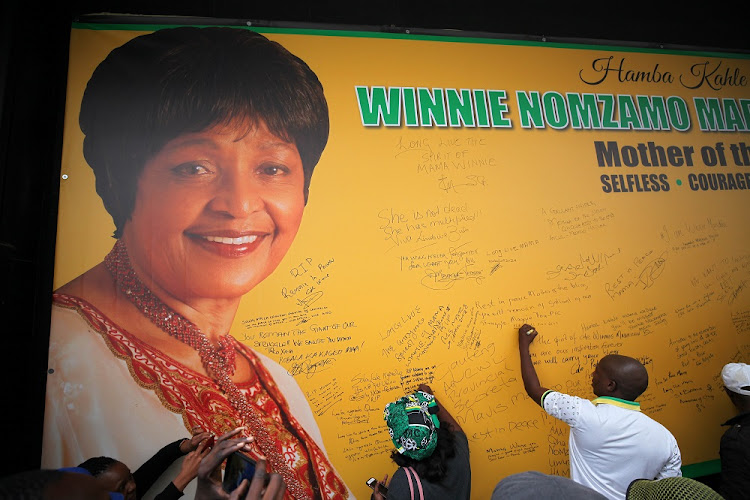 Winnie Mandela wall Members of the ANC write on a wall aimed to commemorate Struggle veteran Winnie Madikizela-Mandela outside Luthuli House. The party has rejected a motion to have Cape Town airport named after her.
Image: Alaister Russell/The Sunday Times

The ANC - along with some opposition MPs - rejected an EFF-sponsored motion in parliament calling for the renaming of Cape Town International Airport after anti-apartheid icon Winnie Madikizela-Mandela.

The ANC MPs‚ led by their chief whip Jackson Mthembu‚ argued that the motion on the renaming of the Cape Town airport‚ tabled by EFF leader Julius Malema‚ was misplaced as parliament had no legislative authority on name changes.

The motion was also rejected on Tuesday by other parties‚ including the DA and the FF+. It was supported by the UDM‚ the NFP‚ the AIC and others.

As the EFF  were on Tuesday expected to table a motion in parliament for the renaming of Cape Town International Airport to Winnie Madikizela-Mandela ...
News
3 years ago

Malema had argued that renaming the Cape Town airport after "Mama Winnie" would be significant recognition of the role played by women in the fight against apartheid. He said too many geographical areas had been renamed after men‚ while the contributions of women had not been adequately recognised.

"Let's rename Cape Town International Airport after Mama Winnie Mandela. There's no currency under the sun that could ever repay her contribution to our freedom. This is not to repay her‚ but to inspire ourselves into accepting the already demonstrated truth that women have led and liberated us as true‚ gallant fighters and warriors in the struggle‚" said Malema.

"When we have elevated her name and image‚ we'll give confidence to the girl child that like Mama Winnie‚ never succumb to silence in front of abuse."

" When the dust of the democratic struggle settled‚ she emerged with grace and dignity‚ working to build communities‚ assist those in need and create ...
News
3 years ago

But the ANC's Dikeledi Magadzi dismissed the EFF's argument as nothing more than an attempt to score cheap points in the run-up to the general elections.

Another ANC MP‚ Xoliswa Tom‚ said Malema's motion "circumvented" the public consultation process that was being undertaken by the Airports Company of South Africa (Acsa).

"The current draft motion by the EFF is fundamentally flawed. Parliament is not constitutionally empowered to resolve on any name change‚ nor is it within its ambit to process the renaming of any institution or structure within the republic‚" said Tom‚ adding that it was the responsibility of the South African Geographical Names Council (SAGNC) to deal with name changes.

The DA's Gregory Grootboom said his party did not support Malema's motion‚ but if the name of the airport had to be changed‚ they would favour one that recognised the history of the Khoisan people‚ regarded as the original residents of the legislative capital.

A public meeting on the renaming of Cape Town International Airport descended into chaos.
News
4 years ago

Cornelius Mulder of the FF+ argued that it should be Mthatha Airport in the Eastern Cape that is renamed after Madikizela-Mandela‚ since she was born in that part of the country.

"If you want to name an airport ... Mthatha makes sense. She was born in Mbizana and there's a long history in terms of that‚" said Mulder.

At the end of the debate‚ Mthembu tabled amendments to Malema's motion. His amendments recognised that the names of other anti-apartheid activists - such as Albertina Sisulu‚ Robert Sobukwe and Khoisan princess Krotoa - should also be considered by Acsa and the SAGNC.

Mthembu's amended motion won the day with 224 votes‚ while 25 voted against it and six abstained.

Malema later argued that the ANC had completely missed the point of his motion‚ saying he was not calling for an immediate name change but rather for parliament to throw its weight behind the name Madikizela-Mandela.

The debate was not without its fair share of drama.

EFF chief whip Floyd Shivambu‚ speaking in defence of Sonti‚ claimed that Tsenoli had dealt unfairly with his colleague and said he "should be removed like a dog" from his position.

Shivambu later withdrew this unparliamentary remark‚ but that did not stop Malema from entering the verbal altercation‚ telling Tsenoli that they were "not scared" of him.

Malema said they were complying with Tsenoli's rulings simply because they wanted their debate and voting to go ahead.

"I can throw this glass at you‚" warned Malema‚ before he was ordered to withdraw the threat to physically harm Tsenoli.