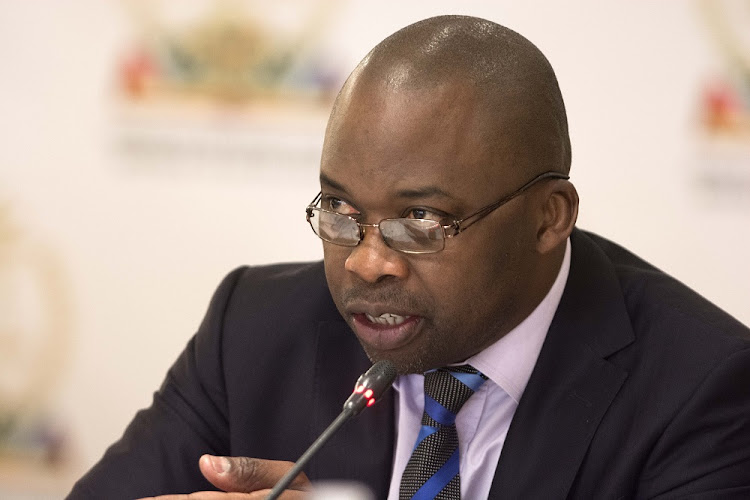 The Congress of the People (Cope) will ask President Cyril Ramaphosa to remove minister of justice and correctional services Michael Masutha and his deputy, Thabang Makwetla, because of their alleged connections with embattled company Bosasa.

The party said it joined the growing number of workers at the department of correctional services who were concerned about conditions at work being affected by the Bosasa scandals over the years.

"The latest revelations of the involvement of even the minister of correctional services, Michael Masutha, with Mr Gavin Watson of Bosasa is not surprising and now completes the circle of those captured by Bosasa and its corruption tentacles," Cope spokesperson Dennis Bloem said.

Masutha detailed, in a parliamentary reply last week, how he spent a weekend in 2016 at a property belonging to Watson, the controversial Bosasa CEO.

Evidence at the state capture commission last month revealed that Makwetla unduly benefited from security upgrades at his home from Bosasa. Makwetla has asked to testify at the commission to give his version of events.

Michael Masutha has detailed how he spent a weekend in 2016 at a property belonging to controversial Bosasa CEO Gavin Watson.
News
3 years ago

Bloem said he had been approached by correctional services employees because of his link with the department in the past. Bloem was chairperson of the portfolio committee between 2004 and 2009, when he was ANC MP.

"Workers know me from the time I was chair of the portfolio committee," Bloem said.

He said workers told him there was a a shortage of uniforms, their weekend overtime pay had been reduced or stopped, pay progression and promotions were stopped for ordinary workers but enjoyed by a few politically connected senior managers.

At the time of publication, sister publication TimesLIVE was yet to receive a response from the department. Its response will be published when it is received.

Bloem said promotion within the department was a serious problem. There were cases of workers who were serving for 20 years in one rank.

Bloem said some whistleblowers who spoke out against corruption became victims through suspension.

"Unsurprisingly, those senior officials implicated by (former Bosasa COO Angelo) Agrizzi at the Zondo commission are still at work and continuing their normal duties," Bloem said.

Cope deputy president Willie Madisha denied that the party had highlighted the plight of the workers only because this was election season.

Nomgcobo Jiba has denied under oath that she received any bribe money from Bosasa.
News
3 years ago

The man appointed as liquidator of controversial state contractor Bosasa said on Friday he was unsure whether workers would be paid until the end of ...
News
3 years ago

Correctional services minister Michael Masutha has blamed the Special Investigating Unit (SIU) for his department's failure to recover money from ...
News
3 years ago

Masutha also announced the suspension of a senior official in order to rid his department of the rot it had in its dealings with Bosasa.
News
3 years ago

The department of justice and constitutional development has appointed audit firm to review all its security contracts from 2006.
News
3 years ago
Next Article